Elfroot is a crafting resource in Dragon Age II.

Elfroot was first used by the elves of Arlathan, hence the name. The root gave their medicines particular efficacy, so when the Imperium conquered the elves, the magisters adopted its use and its popularity spread to all corners of the empire.

Elfroot is a hardy plant with large green leaves that grows wild in many places. It's so common that it tends to show up in most gardens and fields, almost like a weed. Unlike a weed, however, most people appreciate having access to the wonderful little plant. The roots can be used with very little preparation. Rubbing some of the juice on a wound, for example, will speed up healing and numb pain. And chewing on a slice of root treats minor ailments like indigestion, flatulence, and hoarse throats.

There are several varieties, but the most useful for herbalists are the Bitter, Gossamer, and Royal Elfroots.

—An excerpt from The Botanical Compendium by Ines Arancia, botanist[1] 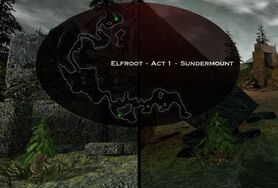 Act 1 – Sundermount Elfroot Map
Add a photo to this gallery

Retrieved from "https://dragonage.fandom.com/wiki/Elfroot_(Dragon_Age_II)?oldid=884259"
Community content is available under CC-BY-SA unless otherwise noted.