Eleanor Cousland (née Mac Eanraig) is the Teyrna of Highever and wife to Bryce Cousland. She is the mother of Fergus Cousland and the Human Noble and a temporary companion in the Human Noble Origin.

Eleanor Mac Eanraig was the daughter of Bann Fearchar Mac Eanraig of the Storm Coast, a famous raider who was known as the Storm Giant. From birth Eleanor and her three siblings were raised on the deck of a warship. Although all four of the Mac Eanraig children were skilled raiders, Eleanor was by far the most skilled, and at the age of fifteen she took down her first Orlesian warship.

Eleanor's ship the Mistral, soon became infamous for capturing and sinking Orlesian ships. As Eleanor's reputation grew, the Orlesians soon began to call her the Seawolf, and eventually her name began to overshadow that of her father.

After King Maric reclaimed Denerim, the rebel army knew the Orlesians would attempt to take back the city by sea. Bann Fearchar called upon every available soldier to bolster his fleet in preparation for the attack. With the help of the soldiers the crew on every one of Fearchar's ships was doubled, and those soldiers who were unable to keep their rations down were stationed along the rocky coast of the Waking Sea to protect the ships by land.

Lord Bryce Cousland, a decorated young military commander, joined the Bann's fleet and led a contingent of soldiers from the deck of Eleanor's ship, the Mistral. Bryce and Eleanor's first meeting went so terribly that it was immortalized in the famous sea shanty called "The Soldier and the Seawolf".

Although Eleanor and Bryce initially came into to conflict with each other, the two worked well together. Together Eleanor and Bryce destroyed a dozen warships in the Battle of Denerim Harbor, and the two soon became good friends.

Shortly after the battle Bryce Cousland's father, Teyrn William Cousland, died of an illness, and as his only son, Bryce was forced to deliver the body from South Reach to Highever. When Bryce arrived at Highever, the nobles were shocked to see the Couslands return to their home after a near seventy year absence, and quikly swore fealty to him. Many of Amaranthine's freeholders soon swore allegiance to Bryce, instead of their arl, which complicated the proceeding of Bryce's ascension to Teyrn.

It ultimately took Bryce four months to claim his seat as teyrn of Highever, and every day as he waited he sent a letter to Eleanor, some days Bryce even sent more than one. The two eventually met face to face once more at King Maric's formal coronation in the capital.

At the coronation Bryce attempted to propose to Eleanor by singing all ten verses of the Soldier and the Seawolf, he only got to three when she accepted his proposal.[1]

She is a sharp and quick-witted woman, as she will brazenly show if the Warden evades her questioning about their desires to become a Grey Warden recruit. Though very aware of the Blight, Eleanor carries herself as befitting a woman of her stature. In conversation with the Warden, she will reveal that she is as worried as the Teyrn is about the impending Blight.

During the female warrior playthrough, the Teyrna refers to herself as a former "battle maiden".

During an attack on Highever, orchestrated by Arl Howe, Eleanor joins the Human Noble in an attempt to defend Castle Cousland from his soldiers; however, they are unsuccessful. In order to buy time for her child and Duncan to escape, she stays behind, refusing to leave her mortally wounded husband.

If, when the Human-Noble Warden confronts Arl Howe in the quest Rescue the Queen, they tell him "I'll kill your wife and son too," Howe will say he made Eleanor kiss his feet before he killed her.

After rescuing Queen Anora, in Eamon's Estate, Anora claims she knew the Cousland family well and that Eleanor was "particularly dear" to her.

If the soon to be warden converses with their mother she will inform them about the treasury, and state that she has the key to the family treasury. However, in the PC version attempting to open the treasury entrance and on the Xbox 360 and PS3 version going near the treasury entrance will trigger the conversation as well. This will allow you to access several valuable items. 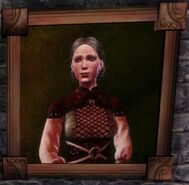 A portrait of Eleanor

Eleanor and Bryce Cousland
Add a photo to this gallery

Retrieved from "https://dragonage.fandom.com/wiki/Eleanor_Cousland?oldid=859033"
Community content is available under CC-BY-SA unless otherwise noted.