watch 03:03
The Loop (Games)
Do you like this video?
“Nobility does not exist without obligation. We owe everything we have, even our lives, to our land and people.”

Eamon Guerrin (born 8:84 Blessed) is the Arl of Redcliffe. He is popular, and holds a great deal of influence and support with the nobility and the Bannorn - enough to make himself be viewed as a threat by other powerful nobles.

Eamon was born around 8:84 Blessed, to the Arl and Arlessa of Redcliffe. Eamon's father also had a male lover named Connor, whom Eamon also called father.[1][2] When Eamon was nine, his father Arl Rendorn Guerrin sent him and his younger brother away with their mother so he could join the Rebel Queen without further endangering them. Arlessa Marina took them to her elder sister Thalia Aurum, at the time the ruling Margravine of Ansburg. Marina fell ill during the journey, and died just a day after reaching Ansburg. Eamon and Teagan were raised by their aunt and uncle, who treated them as if they were their own children. When Rendorn and Connor perished in the Battle of West Hill in 8:99 Blessed, the children were formally adopted by their aunt and uncle.

Eamon returned to Redcliffe to claim his place as Arl in 9:02 Dragon, but he found Redcliffe still occupied by Orlesian forces. He joined the resistance in removing the Orlesian forces from Redcliffe, and in the process earned the affections of Isolde, the daughter of the Orlesian governor, who had spent most of her life in Redcliffe, and was sympathetic to the rebels' plight. Though her infatuation proved one-sided at the time she kept helping the resistance by passing on information. The rebels were successful and Eamon claimed his title as Arl of Redcliffe.

Once he'd reclaimed his lands, Eamon turned his attention to the recovery of the arling. He built Fort Connor in Hinterlands.[2] His efforts resulted in improved trade and security for Redcliffe and its surroundings. He made regular visits to court, where his calm practicality earned him the respect of King Maric. He became one of the King's trusted advisors, and Maric eventually entrusted him with the protection of his bastard son Alistair.

Six years after reclaiming his lands and title, Eamon once again crossed paths with Isolde on a trip to Denerim. Isolde had elected to stay with a cousin in the city instead of returning with her parents to Orlais. The two started a relationship, and she returned with him to Redcliffe, where the two married. Their union was rather controversial, as some people believed Isolde to be an Orlesian spy. Long-buried gossip claiming Alistair to be Eamon's bastard son resurfaced, and Isolde became fixated on the idea of her husband's "proper Fereldan son". Eamon eventually sent Alistair to a monastery to spare his wife's feelings.

Connor was born on an exceptionally warm afternoon and had the immediate affection of his father. Eamon named his son in honour of his father.[2] The toddler was often seen surveying his future arling from atop Eamon's shoulders.[3]

Arl Eamon fell ill with a mysterious condition that even magic could not treat during the Battle of Ostagar.

Since Eamon's forces had not joined up with the king's army at Ostagar, King Cailan having refused Eamon's offers of help as unnecessary and glory-seeking, Alistair suggests appealing to him for help against Teyrn Loghain and the Blight. Upon arriving in Lothering however, the Warden learns that Eamon has succumbed to a mysterious illness, with knights from Redcliffe being sent across the countryside by the arlessa to find the Urn of Sacred Ashes.

Eamon's illness stemmed from his poisoning by Jowan, a Blood Mage in Loghain Mac Tir's employ; it was an attempt by Loghain to hinder Eamon from arriving in Ostagar, in the hopes that his absence would make it easier to win a potential showdown with King Cailan Theirin. The poison was never truly meant to kill Eamon, merely incapacitate him.[4] Unfortunately, Eamon's son Connor, who was being tutored by Jowan in secret, summoned a desire demon in a misguided attempt to help his father and became an abomination. As a result, the demon seized control of the castle forces and turned them into undead soldiers that soon began attacking the village.

While the Warden deals with the demon, Eamon is only cured once a pinch of sacred ashes is used. Learning about what has transpired since Ostagar, Eamon hatches a plan to remove Loghain from power by calling a Landsmeet to put forth Alistair, King Maric's bastard son, as a candidate for the throne. Tasking the Warden with gathering all the armies with the Grey Warden treaties, he adds his own Redcliffe forces to help fight the Blight.

Once the armies have been gathered, Eamon brings the Warden, Alistair, and their companions to his estate in Denerim, and offers advice in preparation for the upcoming Landsmeet. He remains adamant about putting Alistair on the throne, believing that Ferelden must be unified by Theirin blood or risk being divided once more, and warns the Warden to be wary of Anora's attempts to retain power. During the Landsmeet itself, Eamon gives the opening argument as The Warden arrives, and should fighting erupt, draws his greatsword and joins the brawl with his men.

Alistair will appoint Eamon as his regent if he becomes king alone. Eamon accepts it with honor.

During the final onslaught, he will assist the Warden in the battle against the Archdemon atop Fort Drakon (pc

only). During this battle, he is seen wielding a sword and shield and is clad in heavy armor. If the Warden survives, he appears during the Post-Coronation celebrations if Alistair becomes king.

In Return to Ostagar, The Warden can retrieve a letter from Eamon to Cailan which infers that the Arl attempted to gently encourage the King to "put Anora aside", as she would soon be thirty, and had not yet produced an heir.

After the Landsmeet, Eamon elected to remain in Denerim rather than return to Redcliffe. Due to Connor not being able to inherit his arling, Eamon eventually passed the arling to his brother, Teagan.[5] He has become a permanent fixture in Denerim, and his steady demeanor is viewed as a positive influence. 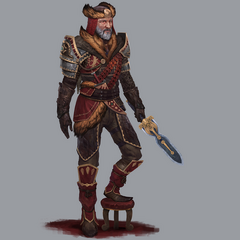 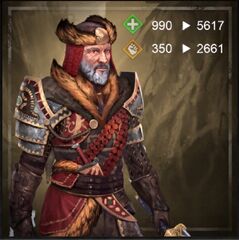 Tier progression of Arl Eamon in Heroes of Dragon Age 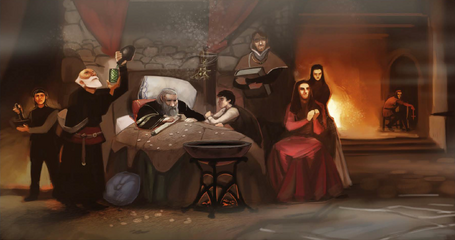 Retrieved from "https://dragonage.fandom.com/wiki/Eamon_Guerrin?oldid=886435"
Community content is available under CC-BY-SA unless otherwise noted.