“Deep beneath the Frostback Mountains sits Orzammar, largest and proudest of the two remaining dwarven cities. Once the seat of an underground empire, Orzammar now stands alone, cut off from the world by the darkspawn, still clinging to the memory of its former glory. Below the vast statues and gilded halls where the noble families play at politics, the lower castes live in their shadows, scurrying to serve like their Ancestors before them. Below that… is you. You are casteless, the dirty secret staining Orzammar's perfect society, forced, along with your sister, to sell your services to the crime lord, Beraht. To the rest of Orzammar, you are proof that the casteless deserve their fate; but you know you do what you have to—the same as everyone—just to survive.”

New campaign with a Dwarf Commoner character (Warrior or Rogue)

The Dwarf Commoner Origin is one of six playable origins available in Dragon Age: Origins. As a casteless dwarf, this character is reduced to a life of petty crime.

“There was a merchant come by Dust Town the other day, some poor sod who's had his skin burnt by the sun up on the surface lands once too often, I'd say. How he gets let back into Orzammar I can't rightly say… he claims that he has a deal worked out. Who am I to argue when someone has an angle?

Point is, he tells me what them cloudheads think of us dwarves down here. It isn't even just the humans, there's surface dwarves who're born and bred up in the sun who think the same things, don't know any different. He says they say dwarves are smiths. Proud, noble warriors who like nothing better than to mine a vein of ore or forge a decent sword.

Had us a good laugh, we did.

What would them humans think if they came to Dust Town and saw how the rest of us really lived? The ones that are casteless, the ones who aren't even considered worthy of being servants in the homes of the wealthy or pure enough to work the forges in the Shaperate? The nobles make sure we casteless get tattooed so they know who we are when they see us. That way they know who to spit on, right? Helps us, too. Makes it easier to figure out whose pockets are worth picking.

That's a joke. Not all of the casteless are criminals. Some of us are beggars, nug-catchers, street sweepers and noble hunters. We do what we can to survive. And let me tell you, when the last defenses of Orzammar finally fall to the darkspawn, it'll be the casteless who survive then. Surviving is all we know how to do. Won't the cloudheads be scratching their heads when that happens?”[1]

Walkthrough: On the Streets of Dust Town[]

The origin story opens in the Slums Home, where Beraht is discussing work with Rica and the Dwarf Commoner. When the first conversation sequence ends, the Dwarf Commoner may converse further with their family; the half-sister Rica and their mother, Kalah. If the Dwarf Commoner buys some mosswine and brings it back to Kalah, they can converse with her a bit more, but there is apparently nothing that changes any quest outcomes at this point. Looting the chest in the back of the room yields a dagger (iron). You can then head outside, where Leske is waiting.

Oskias, one of Beraht's smugglers, has been holding his own pockets. The Dwarf Commoner is task with finding Oskias and showing him exactly how Beraht feels about being cheated. Oskias was last seen in Tapster's Tavern.

The Warrior caste is holding a Proving today. Beraht has lots of coins riding on the young fighter Everd and wants the Dwarf Commoner to make sure he wins. Beraht gives them a drug to use on Mainar, Everd's opponent.

In addition to those selected by the player at character creation, a Dwarf Commoner Warden automatically begins with the following:

Duncan uses the Right of Conscription and recruits the Dwarf Commoner which saves them from a death sentence for dishonoring the sacred Provings and the revered Ancestors. If it has not been unlocked in a previous playthrough, on arrival in Ostagar the Casteless achievement will be awarded.

Codex entry: The City of Orzammar 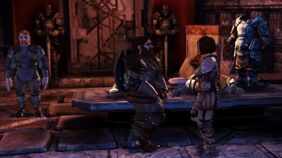 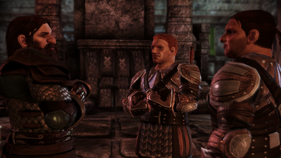 Beraht and two other thugs