“Men and women from every race, warriors and mages, barbarians and kings... the Grey Wardens sacrificed everything to stem the tide of darkness...and prevailed.”

Duncan was the Warden-Commander of the Fereldan Grey Wardens from sometime after 9:10 Dragon[note] until 9:30 Dragon. When Urthemiel rose and the Fifth Blight began, he recruited and mentored The Warden and Alistair shortly before the battle at Ostagar. He was among the first Wardens allowed to return to Ferelden after the actions of Sophia Dryden resulted in the order being exiled from the country. Subsequently, he faced suspicion and hostility in his search for new recruits.

Duncan was born in Highever but spent his childhood between Orlais and the Free Marches. His mother Tayana was from Rivain while his father Arryn was a Fereldan carpenter with Tevinter origins. After the death of his parents he was forced to become a thief to survive on the streets of Val Royeaux.[2]

Growing up in Val Royeaux, Duncan witnessed a lot of death and disappearances. At one point, Duncan befriended a young female pickpocket who was attracted to him. One day she was struck by a nobleman's carriage begging for help but was ignored. Eventually she crawled into a nearby alleyway where she died from blood loss.

Duncan was known to seek out several quick dalliances at flophouses, encounters that ended quickly after the deed was done.

Barely more than a boy, Duncan broke into an inn room to rob it, and was confronted by his victim while attempting to steal a ring. The man refused to give in, even with a knife to his throat, and they fought; in the struggle, Duncan unintentionally fatally wounded his victim. As the man lay dying, he thanked Duncan, to his shock and horror.

The chevaliers informed Duncan as he was arrested that the victim was a Grey Warden. When Commander Genevieve offered him a place among the Grey Wardens the night before his execution, he refused, thinking that a Grey Wardens' life must be horrible indeed to thank the one who murdered him. However, Genevieve showed up the next day during his execution and used the Right of Conscription in order to forcefully recruit him into the order. He was not entirely wrong at first; his fellow Wardens despised him, and in the months that followed, an unhappy Duncan attempted to run away several times, and continued to steal when the opportunity arose, a habit that saved his life in the Kinloch Hold some months later.

Eventually, the other Wardens began to accept him and revealed the truth to Duncan. His victim, Guy, had been betrothed to Genevieve, and the prize he refused to give up was intended to be her wedding ring. Duncan stopped running away and his unwavering loyalty to Genevieve in the last year of her life appeared, at least in part, to be have been born of guilt.

Six months after his induction into the order, Duncan was a member of the Grey Warden attachment led by Genevieve from Orlais on a mission to find the missing Warden Bregan, Genevieve's brother and the previous Warden-Commander of Orlais. Genevieve charges him with a grim duty: protect their guide in the Deep Roads, King Maric Theirin, or, should the king learn information detrimental to the Order, kill him. As Commander Genevieve put it, "the Grey Wardens protect all of Thedas, not simply one small nation." Instead Duncan befriended Maric, and his actions were instrumental to Maric's survival.

During their mission to ascertain the fate of Bregan, Genevieve's brother who had left on his calling, Duncan, Maric and the other Grey Wardens were confronted by a demon and trapped in the Fade. While attempting to rescue Genevieve from her dream in the Fade, Duncan was confronted with the happy life she had wanted to lead had her fiancé lived. When Duncan tried to convince her to leave, she directed the full brunt of her grief and fury over the boy's part in Guy's death at him. She bitterly told Duncan she thought the fact he survived his Joining was a cruel joke played on her by the Maker. She had wished him dead, and so had forced him into the Joining in the hope he would die after getting a taste of what the Wardens went through to protect scum like him, only to be stuck with him. Duncan was stricken at first until he surmised that if she had truly wanted him gone, she could have left him to his execution, or transferred him to another outpost in the order. He confronted her with the truth, and reluctantly Genevieve left with him, escaping the Fade.

After they are captured and Genevieve and Utha join Bregan to side with the Architect, Duncan frees Maric and Fiona and together they flee from Kul-Baras while Kell ap Morgan along with Hafter stay behind to help their escape. Eventually they reach the surface but are captured by First Enchanter Remille and being brought to Kinloch Hold. When the rogue Wardens and the Architect turn against each other, Duncan takes the opportunity to kill Remille using the ebony-black dagger he had stolen from him earlier, while Loghain Mac Tir liberates the tower.

Later, Duncan is named as second in command of the Ferelden Grey Wardens, serving under Warden-Commander Polara and swears to watch over Fiona and Maric's son.

Duncan appears in every Origin story, searching for a recruit to join the Grey Wardens to aid against the growing threat of the Fifth Blight. He will recruit the Warden either voluntarily or through conscription, and is usually available to answer questions about the Grey Wardens and the darkspawn horde massing in the Korcari Wilds during the origin story.

After Duncan recruits the Warden, the two travel to the ruins of Ostagar to take part in the upcoming battle with the King's army against the darkspawn. Duncan explains to the Warden that Ostagar is an ideal place to fend off the darkspawn and he is certain it is where the bulk of the darkspawn horde will show itself. Although the Fereldan Grey Wardens are few in number, all of them have gathered in Ostagar to face the Blight. Duncan believes the Blight must be stopped at Ostagar and warns if it spreads to the north, then Ferelden will fall.

After receiving a friendly royal welcome from King Cailan himself, Duncan introduces his newest recruit to the king. King Cailan has been emboldened by past victories against the darkspawn and even starts to doubt that they face a true Blight since an archdemon has yet to show itself. Duncan attempts to temper Cailan's grand ambitions with realistic expectations while also subtly encouraging Cailan's enthusiasm. Duncan also reminds Cailan that his uncle Eamon Guerrin's forces will be arriving in a week's time. Cailan appears cavalier and dismisses Eamon's help as unnecessary and glory-seeking; he seems confident that future battles against the darkspawn will result in victory regardless.

Once Cailan departs to strategize with Teyrn Loghain Mac Tir, Duncan tells the Warden that he is concerned about the growing numbers of the darkspawn horde. Duncan believes the horde has likely outnumbered them and he is convinced that an archdemon is behind the build up of darkspawn forces. However, he admits he cannot ask the king to solely act on his intuition.

Duncan instructs the Warden to seek out Alistair and the two other recruits to prepare for the Joining ritual. He tasks Alistair and the recruits with heading into the Korcari Wilds to obtain three vials of darkspawn blood for the ritual, as well as recovering old treaties from a Grey Warden cache in the wilds. During this time you can steal from him various items including runes, Greater Nature Salve and poultices.

Shortly before the battle, Duncan oversees the Joining ceremony for the new recruits. Daveth does not survive the ritual, whereupon Ser Jory panics and attempts to flee, causing Duncan to regretfully kill him. The Warden is the only recruit to survive the Joining, and is informed that Cailan requested their presence at the upcoming strategy meeting for the coming Battle of Ostagar.

At a war council soon after, King Cailan orders Alistair and the Warden to light the beacon on top of the Tower of Ishal, signaling for Loghain and his army to flank the engaged darkspawn horde. Loghain, however, decides to withdraw his forces after seeing the signal. The royal army and the Grey Wardens, now hopelessly outnumbered, lose the battle. King Cailan is crushed to death by an ogre that Duncan slays, falling himself under the next darkspawn blitz. Though Duncan is confirmed to be dead, his actual death is not witnessed, nor is his body found if the Warden returns to Ostagar.

In a discussion later in the game, Alistair reveals that Duncan had recently started to experience the "nightmares"—intense visions of the darkspawn that begin shortly after the Joining and fall away gradually—again, suggesting that the taint was starting to claim him and he did not have much time left.

Late in the game—during the Landsmeet—the party can find Duncan's Shield in a Grey Warden cache in Denerim. The shield is a gift for Alistair as well as a powerful armor piece, one of the best in the game. In the Return to Ostagar DLC the party can reclaim Duncan's Sword and Duncan's Dagger from the ruins of Ostagar. 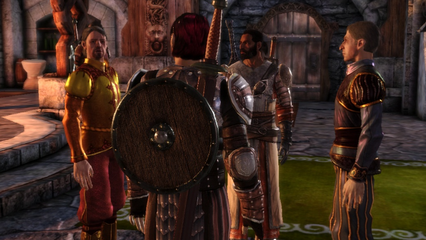 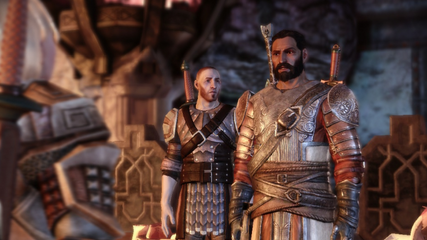 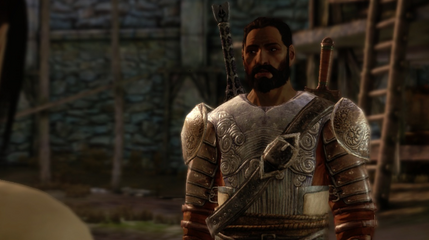 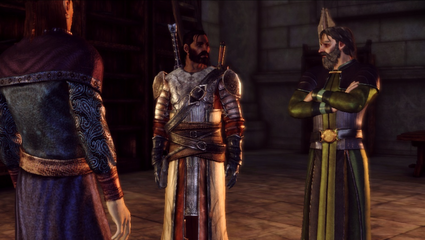 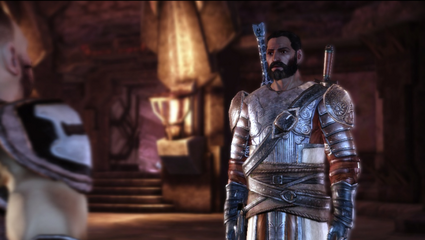 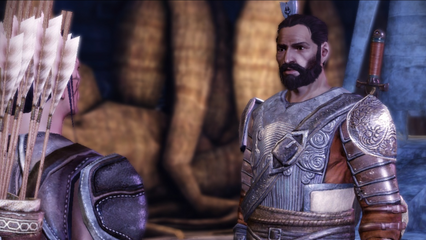 Tier progression of Duncan in Heroes of Dragon Age 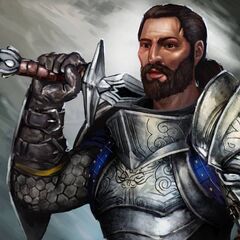 Artwork of Duncan in Heroes of Dragon Age