For the specialization in Dragon Age: Origins, see Duelist (Origins).

Duelists specialize in calling out single opponents and eliminating them, quickly. While the art of dueling is less popular in Kirkwall than the more-refined cities of Orlais, there are still plenty of trainers who can teach rogues they deem sufficiently quick of wit. The rogue's preferred weapon, be it blade or bow, has little consequence on this tree. A distracted and enraged foe is an easy target at any range.

Duelist is one of the specializations available to the rogue class in Dragon Age II.

The Duelist commands battle like a craftsman. Many rogues are adept at destroying enemies, but Duelists want challenge as well as victory. To them, combat is a proving ground where mettle is tested and mastery is proven. Unlike their stealthier counterparts, followers of this specialization will often announce their intent, inviting attention with bravado and insult. And while few can close as quickly or strike as decisively, Duelists can also choose to match targets parry for parry, extending or ending the battle as they see fit. To face a Duelist is to face a master of blade or bow—it's an opportunity to be grateful for, however briefly they allow it to last.[1] 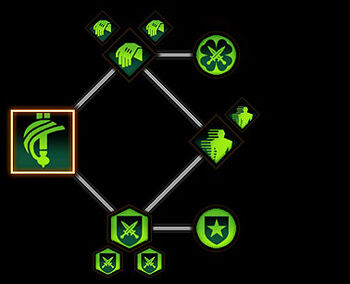 There isn't much to say about this class specialization... it's pretty straight forward. A few things are still worth mentioning:

First - it's important to note that Vendetta doesn't work well with archery, as it teleports the player to the target.

Second - it seems that most talents ignore a player's defense and hit automatically. Parry will therefore be useful only against normal attacks. A Duelist might still be vulnerable to mages.

Third - an enemy affected by your Throw the Gauntlet might still engage other targets as soon as you enter stealth or use threat-manipulating talents.

Last but not least - both attack and defense are significantly nerfed against elite or boss targets. You can hover over both stats to see the exact percentages.

Retrieved from "https://dragonage.fandom.com/wiki/Duelist_(Dragon_Age_II)?oldid=787130"
Community content is available under CC-BY-SA unless otherwise noted.