A dragon thrall is a dragon that has been corrupted by the darkspawn taint, and thus been turned into a ghoul.

Only two dragon thralls appear in the entirety of Dragon Age: Origins. During The Battle of Denerim, the Warden must ascend Fort Drakon in order to reach and confront the Archdemon. At the foot of the tower, the Warden is beset by a pair of dragon thralls and a contingent of darkspawn. Only by slaying them is the Warden allowed access to the fort.

Just like the normal game, only two dragon thralls appear in Awakening. Fought at the end of The Righteous Path quest, they are considered both Boss-level enemies and the Warden-Commander must defeat them in order to escape the Silverite Mine.

A dragon thrall at the ready. 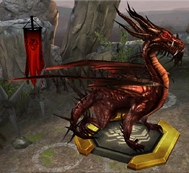 A dragon thrall in Heroes of Dragon Age.
Add a photo to this gallery

Retrieved from "https://dragonage.fandom.com/wiki/Dragon_thrall?oldid=862054"
Community content is available under CC-BY-SA unless otherwise noted.