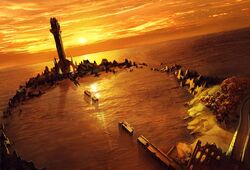 The headquarters of the Circle of Magi in Ferelden, located in the middle of Lake Calenhad. There are no more than a few dozen mages in it at any one time. Kinloch Hold, known now the Tower of the Circle of Magi, was built by the Avvars with some help from the dwarves and stood mighty for a long time, thought of as impregnable until the Tevinter Imperium succeeded in driving the Avvars from it.

As the Tevinter Imperium were rather brutal in doing so, the tower caught something of a bad reputation and was thought to be cursed until the Circle of Magi assumed control of it in 3:87 Towers Age.

Retrieved from "https://dragonage.fandom.com/wiki/Dragon_Age_Wiki?oldid=112976"
Community content is available under CC-BY-SA unless otherwise noted.