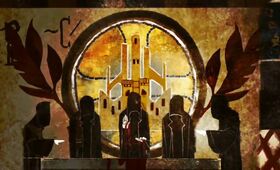 The Chantry calendar measures time as a period of Ages. The current is the Dragon Age, while the period before was the Blessed Age. Each Age lasts approximately a century and there have been nine so far.

In the 99th year of each Age the Divine looks for an event or portent in order to determine the name of the new Age. The last portent was a dragon awakening and going on a rampage. This suggests an age full of violence and destruction.

Retrieved from "https://dragonage.fandom.com/wiki/Dragon_Age_Wiki?oldid=130883"
Community content is available under CC-BY-SA unless otherwise noted.