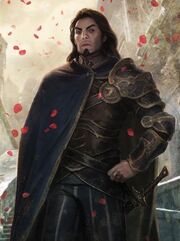 There are six origins that are playable in Dragon Age: Origins. These playable prestories will allow the Warden to put themselves in a specific role within the social structure of Ferelden and will help explain motivations for the Warden joining the Grey Wardens.

The origins are open to both genders, but they are dependent upon both race and class. Dwarves cannot be mages. In Thedas they are unable to interact with the Fade (i.e. dream) and are therefore incredibly resistant to magic. In order to become a mage, and use magic, players must go through the mage origin and be either an elf or a human. The other two classes (warrior and rogue) are available to all other races and origins. All of the origins have set surnames.

Retrieved from "https://dragonage.fandom.com/wiki/Dragon_Age_Wiki?oldid=112976"
Community content is available under CC-BY-SA unless otherwise noted.