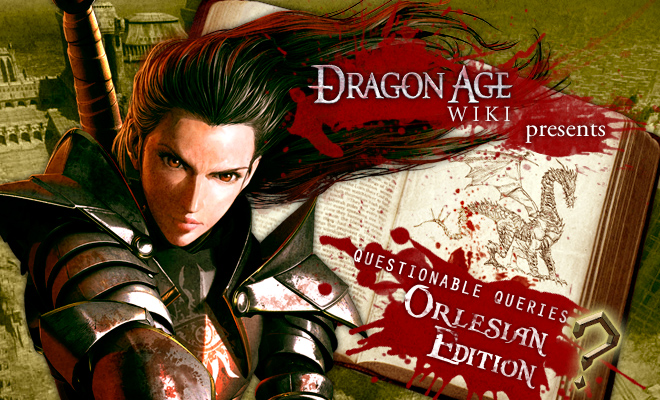 Questionable Queries is a series of Q&A with developers, animators and other notable folks who work to bring you Dragon Age

Dragon Age Wiki would like to thank the participants in our Questionable Queries: Orlesian Edition. We had some great questions which were answered by the Funimation team. And, we even got a few bonus questions answered by Mike Laidlaw himself!

This is going to be a great movie. Pre-order a copy today!

Winners will be required to send me an email with their names and address.

The prizes will be given out to the following editors for their excellent questions:

How familiar was the FUNimation team with the Dragon Age franchise prior to working on the film? And how did it effect the vision for "Dawn of the Seeker"? – Coronaholic

We were all big fans of the franchise and played both games. We loved the games so much that we wanted to make the movie as true as possible to the games that the Bioware team worked so hard on while at the same time including enough elements for viewers unfamiliar with the franchise to enjoy it. --April Bennett, Producer, FUNimation

Will the the DVD and Blu-Ray contain both Japanese and English language vocal tracks? - Michael Largness

How tough is it to bring a strongly western property into an eastern form of entertainment? – Coronaholic

It was interesting because the Japanese like to tell their stories in a more visual style, and the challenge with this movie is that Dragon Age is a very dialogue driven world so we had to find the balance between the two worlds. --April Bennett, Producer, FUNimation

What was your favorite part of the production process? - Moonwolve

I would say the storyboards, because that is when you start seeing the script you worked so hard on come to life! --April Bennett, Producer, FUNimation

Can we expect more Dragon Age movies in the future? -- Jhayami

We would like nothing more than to continue our relationship with the Dragon Age franchise. It will all depend on how popular the movie becomes. If it’s a huge success, the sky’s the limit on what we could do. --Curtis Shaw, Senior Brand Manager, FUNimation

Of all the characters featured in Dawn of the Seeker, which do you feel was the most enjoyable? - Michael Largness

I enjoyed Cassandra a lot because I loved her approach and she was so brave and feisty. She was not afraid and had no fear whatsoever. I also enjoyed the relationship between her and her mentor Byron, she softened herself with him, because she is very guarded otherwise. -- Chris Moujaes, Executive Producer, FUNimation
I actually enjoyed Galyan because he provided a nice balance and playfulness to the kick ass Cassandra. --April Bennett, Producer, FUNimation

Who is your favorite character in the film and why? Moonwolve

I like Galyan the most. But then again, Han Solo ranks at the top of my list too… so it’s no surprise. I guess I always wished I could be a charming rogue. --Curtis Shaw, Senior Brand Manager, FUNimation

Why did you choose Cassandra to be the main protagonist for this film? We first met her in D.A.2, and got to see her evolve as the story progressed (Much like the player does) based on how the story unfolds. This made her a very interesting character, but what was the real reason that made you choose her to be the leader of this story? --J Shepard

Cassandra’s an important character for the future of the DA universe, and we wanted to dig into her background a bit further. Her story also let us comfortably spin a Dragon Age tale that doesn’t conflict with the games, or steal the thunder from Hawke or the Warden from DAO, which was important to us. --Mike Laidlaw, Dragon Age Creative Director- BioWare Studios

Does Frenic transform into the giant Pride Demon seen in the teaser? And, how does it become so huge? - Michael Largness

If we told you that would spoil the movie. --Curtis Shaw, Senior Brand Manager, FUNimation

How big of an impact do you think Cassandra and the Seekers will have on Thedas post-Dragon Age II? -Shadow501

Will any of the story line from Dawn of Seeker tie in with the upcoming Dragon Age game franchise? Like books, DLC etc? --Phoebe B.

The events here are part of the DA world, so expect them to come up, to some degree. - Mike Laidlaw, Dragon Age Creative Director- BioWare Studios

Any chance to see Regalyan as companion in DA 3? - Леди боли

We haven’t officially announced that there will even be a DAIII…though we have certainly dropped some hints…so we can’t really discuss any elements of it. --Mike Laidlaw, Dragon Age Creative Director- BioWare Studios

Was there much reference to the art style of Dragon Age: Origins and/or Dragon Age 2, either in-game or concept art? Or was it more of an impromptu and outwardly inspired (anime) art style? – DeltaEcho

It was a mixture of Oxybots house style, while still staying true with the Dragon Age 2 designs. --April Bennett, Producer, FUNimation

I would strangle Anders because he is pretty whiny and doesn’t man up and make a decision on which world he wants to live in, kiss Leliana because it doesn’t matter whether I roll a male or a female Warden… she loves me just the same, and make Master Wade have to help my dad do repairs around the house. --Curtis Shaw, Senior Brand Manager, FUNimation
Strangle Gamlen because he blew all of our money. The first half of Dragon Age II would have been a breeze if it weren't for him. Kiss Merrill because she's a cute and funny elf girl that swings both ways – with just a bit of a dark side. Take fem Hawke home because she's witty (at least my version), hot and the Champion of Kirkwall. I doubt my parents would disapprove, not that I'm worried about that. --Justin Rojas, Senior Social Media Manager, FUNimation

What is your theory about Flemeth? What is she really? What if she is really Andraste? Cause I mean you can't kill her, She knew about the blight in Ferelden, She knew that Loghain would betray Maric on day, She knew about the event that would happen in Kirkwall, & she is a very old & very powerful mage apostate that has been around for Centuries. –Alandale

Wow, I hadn’t thought about that. I think it’s more likely that she is the dragon that kicks your butt when you sound the gong or blow the horn. --Curtis Shaw, Senior Brand Manager, FUNimation
I'm not sure I want to question an omniscient dragon woman, though my theory is that she was super hot in her younger days. --Justin Rojas, Senior Social Media Manager, FUNimation

Travellers of Ferelden, perhaps you too have heard tales of a new power in our world; The Seekers of Truth. I have heard word that one such seeker by the name of Cassandra, has been accused of treason and murder, and through no small stroke of luck, I have come into contact with some people who can tell you more if you are willing to travel on.

After all, seek and you shall find.

On May 29, Dragon Age: Dawn of the Seeker (Pre-order it here) will be released on DVD and Blu-Ray. To celebrate this, Dragon Age Wiki and FUNimation is excited to offer our editors and readers a chance to find out more about movie by holding a Q&A with some of the creators from FUNimation. Not only that, courtesy of FUNimation, we will be offering 3 t-shirts, 3 posters and 3 dog tags as prizes for the best questions. So get going on those questionable queries!

Your questions will be answered by these fine folks

Ask about their favorite characters! Or find out their theories about what Flemeth really is! Or find out more about their upcoming movie Dragon Age: Dawn of the Seeker; their inspiration and their decision to go anime with it.

You can pick up Dragon Age: Dawn of the Seeker from the Amazon store.

Retrieved from "https://dragonage.fandom.com/wiki/Dragon_Age_Wiki:Questionable_Queries_Orlesian_Edition?oldid=414102"
Community content is available under CC-BY-SA unless otherwise noted.