Dragon Age Journeys is a 2-D flash game set in the Dragon Age universe released on November 3, 2009. It is a single player game, told in three chapters. Ethan Levy, a producer with EA 2-D, describes it as a "tactical RPG".[1] It features classes, spells, talents, sound effects and music taken directly from Dragon Age: Origins. 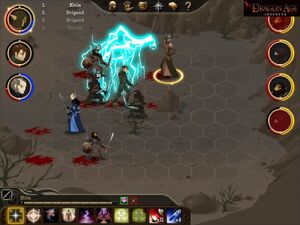 Chapter One: The Deep Roads[]

Chapter one is set in the dwarven city of Orzammar and the darkspawn infested Deep Roads.

The protagonist of the game Journeys starts in the Deep Roads, being there for different reasons according to their race and background.

Whatever the reasons though, the protagonist's party is quickly attacked by a glowing Hurlock emissary, an Ogre and some darkspawn. The others in the party die but the protagonist manages to flee and barely alive, arrives back at Orzammar.

After being healed by a Spirit healer named Ardum, the protagonist ventures back to the Deep roads, searching for a Warden named Martine.

The three have to gain the approval of some citizens of Orzammar so as to speak with the King and inform him of the new threat. During the quests, a new member may enter the party, Ryanth the bard.

In the end, during a quest given by the crime lord Saria, one to find what happened with her diamond smugglers, the party encounters the glowing Emissary in a nearby diamond mine. The emissary placed plenty of digging darkspawn for some unknown reason.

Already weakened from powering his digging machines, the party of the protagonist is able to defeat the Emissary, who flees and manages to escape. The protagonist shuts down the emissary's excavation site, left wondering what the emissary was actually searching for...

Helm of the Deep - Earn all five achievements in Dragon Age Journeys: The Deep Roads.

Note: All these items are now available at the following link: DLC bundle

Chapter 2: The Darkness Within and Chapter 3 were being developed, however they were never released to the public. These two chapters were designed to include premium content that the player could purchase.