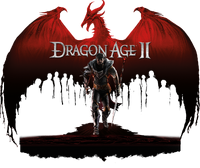 It is approximately one hour in length. The story takes the player through the prologue from the escape from Lothering and then skips to Kirkwall, for the quest Fools Rush In. Inventory access is limited and the inventory page cannot be used to equip armor, weapons or accessories. The demo allows rogues and warriors to change weapon styles by interacting with a dead refugee corpse right after Varric begins his 'real' story. Rogues can choose between two daggers or a bow and warriors can choose between a two-handed sword or a sword and shield. The demo also contains slightly different dialogue between Varric and Cassandra. The PC version of the demo also contains a difference in combat, in that in the demo, the player can attack slightly faster than the auto-attack speed by repeatedly issuing the attack command, either by repeatedly right-clicking on the enemy or mashing on the R key. This applies to every weapon except the bow. In the PC version of the final game, the speed difference between auto-attack and "button mashing" no longer seems to be present.

When the demo was launched, a counter was displayed on the official website. It was stated that if the demo had over one million downloads within the first week, all players would get two in-game items for the full game, Lothering's Lament and The Far Cliffs of Kirkwall.[1] This goal was reached and a new challenge was set up. A third book called Of Things Not Lost would be unlocked if by March 4, 1,000,000 impressions were made for every post the official Facebook page would make and this too was attained on the last day, March 4th.

The following companions are available in the demo:

The following enemies are encountered in the demo:

Retrieved from "https://dragonage.fandom.com/wiki/Dragon_Age_II_demo?oldid=535647"
Community content is available under CC-BY-SA unless otherwise noted.