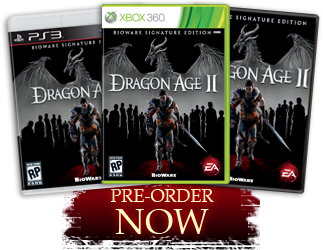 Dragon Age II BioWare Signature Edition was the physical media's premium edition of the game Dragon Age II that was available as a free upgrade if Dragon Age II was pre-ordered before January 11, 2011 for any platform. It was available from GameStop, Amazon, Electronics Boutique, and the EA store on October 14th, 2010 in a limited release, officially until January 11th, 2011. The Black Emporium (DLC) is sold separately, as well as the other contents when the SE is no longer available.[1]

Besides the base game, the Dragon Age II BioWare Signature Edition comes with:

The following items are available in this premium content.

+1 to all attributes
+2% magic resistance

Retrieved from "https://dragonage.fandom.com/wiki/Dragon_Age_II_BioWare_Signature_Edition?oldid=803694"
Community content is available under CC-BY-SA unless otherwise noted.