Start a Wiki
watch 01:37
Dragon Age II Trailer
Do you like this video? 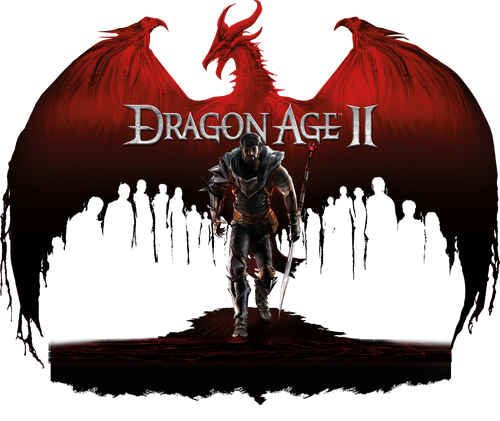 Experience the epic sequel to the 2009 Game of the Year from the critically acclaimed makers of Dragon Age: Origins and Mass Effect 2. You are one of the few who escaped the destruction of your home. Now, forced to fight for survival in an ever-changing world, you must gather the deadliest of allies, amass fame and fortune, and seal your place in history. This is the story of how the world changed forever. The legend of your Rise to Power begins now.

Dragon Age II thrusts players into the role of Hawke, a penniless refugee who rises to power to become the single most important character in the world of Dragon Age. Known to be a survivor of the Blight and the Champion of Kirkwall, the legend around Hawke’s rise to power is shrouded in myth and rumor. Featuring an all-new story spanning 10 years, players will help tell that tale by making tough moral choices, gathering the deadliest of allies, amassing fame and fortune, and sealing their place in history. The way you play will write the story of how the world is changed forever.[3]

Dragon Age II will feature a greater difference between races, meaning elves, dwarves and qunari are being reviewed and redesigned.[5]

Dragon Age II allows the player to import saves from any completed Dragon Age: Origins playthrough. So, while you may be controlling a different character in Dragon Age II, the choices of The Warden made in Origins are still imported from your save and reflected in the world.[6] Choices from Dragon Age: Origins - Awakening, Golems of Amgarrak, and Witch Hunt will also be imported.[7]

The dialogue system of Dragon Age: Origins will be replaced with a dialogue wheel, similar to BioWare's earlier title Mass Effect. Unlike Mass Effect however, when you move your cursor over a selection, an icon is shown in the center of the wheel that indicates the intent of the player line: flirty, violent, sarcastic, etc.[8] The dialogue wheel will have up to six dialogue options for players to choose from.

Additionally, the player character Hawke will be fully voiced.[8]

Dragon Age II will use a Friendship and Rivalry system. In it instead of only getting content and combat bonuses based on positive approval, you can either build a friendly or antagonistic relationship with your companions.[9] Also, specific actions can still cause companions to turn on you, in spite of their approval rating.

There are fewer gifts in Dragon Age II, and the gifts are specific to each companion. Gifts will also prompt specific dialogues.[9]

In Dragon Age: Origins in order to make a potion or a poison or a trap PC had to first learn the recipe, then find all of the necessary ingredients. Now, rather than having to carry components around with PC, PC simply have to find their source out in the world. Once PC comes across a strain of Elfroot (for example) all crafting vendors will have access to it - no need to shuttle bits and pieces back and forth. The challenge now comes from finding the different sources of raw materials, and the different strains of components. It's a far more elegant system, one that rewards exploration over hoarding, unclogging PCs' inventory in the process.[10]

The linear progression of the skill trees in Origins meant that the player frequently had to spend valuable points on talents the player never had any intention of using so that the player could get to the one he/ she actually wanted.

The skill trees in Dragon Age II are actually webs, more circular in nature and offering more than one path to the different types of skills. Skill upgrades branch off from their base skills, leaving the way clear for other progressions.[11]

In an interview with Joystiq, BioWare VP Greg Zeschuk stated, "I think one of the key things we're working on in Dragon Age II is the technology. I can confirm that we're doing a lot of work on the Dragon Age engine, and doing a lot of stuff to pump it -- to make it visually super hot."[12]

According to the RPG French interview with Mike Laidlaw, Dragon Age II will feature romances "for all genders and orientations. [18]

Three DLC items/packs have been announced:

Retrieved from "https://dragonage.fandom.com/wiki/Dragon_Age_II?oldid=217194"
Community content is available under CC-BY-SA unless otherwise noted.