The Dragon Age tabletop role-playing game is authored by Chris Pramas and was released by publisher Green Ronin in 2010. The game is recommended for 3-5 players and rated age 14+ (Dark Fantasy).

In this game players can take on the personas of warriors, mages, and rogues in the world of Thedas and try to make their names by overcoming sinister foes and deadly challenges. They may face down the vile darkspawn in ancient dwarven ruins, engage in a duel of wits with an Orlesian noble, or even uncover the secrets of the Fade.

The Core Rulebook combines the three sets into one book, advances the timeline of the game after the Fifth Blight, applies errata and concepts from Dragon Age: Inquisition, and includes a new adventure, "Invisible Chains".

When Green Ronin released the Core Rulebook, the former sets were put out of print. 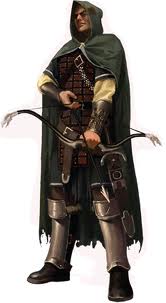 You will need a copy of the Core Rulebook (or the Player's Guide of any of the former sets) to create a character. The free Quick Start Guide does not contain all the information needed to create your own character, but it does contain pre-generated sample characters. You will also need three 6-sided dice (d6) and either a copy of the character sheet or some paper or other way to record information.

There are several factors to decide while making your character.

From the Core Rulebook:

New from the Core Rulebook:

New from the Core Rulebook:

From the Core Rulebook:

Are you male or female? Characters can be any race or class regardless of gender, and be equally successful in whatever they choose to do.

In the Core Rulebook, or in the player's guides, there are descriptions available for the following:

There are basic adjustments every character using these backgrounds gets. There are bonuses that must be rolled for in addition to these.

Characters who reach levels 6 and 14 can choose the following specializations, depending of their classes and sometimes, their backgrounds as well.

Characters of all classes and specializations can also become Grey Wardens.

The story is broken up into a four part adventure with an epilogue provided for an optional continuation of game play. Each part is subdivided into smaller sections that may consist of a combat encounter, exploration encounter, and/or role playing encounter. The story outline is open enough to add in additional encounters using the adversaries, traps, and NPC provided in the Game Master’s Guide for this adventure. The adventure is designed to take a group of starting characters to level 2 by completing the adventure.

It is autumn in Ferelden, and the Harvest is at hand. Here in wine country, the harvest is a big event as people bring in the grapes and prepare the wine. A festival is always held, and all are welcome, residents and travelers alike. As can often happen during a festival, sometimes people get into their cups and things get out of hand, words are exchanged and tempers flare.

A group of adventurers is sought to undertake an investigation of unrest in and around the village of Vintiver in the Southron Hills. You will need to explore the village, local farmholds, and Brecilian Forest. You will meet a variety of persons in the village and likely Dalish elves in the forest. You may encounter any number of different enemies and animals on your travels. There will be excitement and adventure, and likely treasure to be found.

Come and assist the local warden (constable) as he serves the Bann in discovering exactly who, or what "Mythallen" could be.

Adventure Description: A Bann Too Many[]

A Bann Too Many takes place in the Ruswold Valley in the Southron Hills. It can be used as a continuation of The Dalish Curse, or as a stand-alone adventure.

The story is broken up into a five part adventure with three subplots provided for an optional game play. Each part is subdivided into smaller sections that may consist of a combat encounter, exploration encounter, and/or role playing encounter. The story outline is open enough to add in additional encounters using the adversaries, traps, and NPC provided in the Game Master's Guide for this adventure. The adventure is designed for low level adventurers, level 1 or 2. The Ruswold Valley spans the Southron Hills. The east end of the valley empties into the Brecilian Forest where a logging village, Logerswold, is situated. The west end of the valley opens into the Bannorn, providing precious natural resources to the vast expanse of the plains of Ferelden.

There has been an election in the Ruswold Valley. Valdur Krole has been ousted as the Bann after 30 years of service and a young lord from a neighboring valley has been elected in his place. Bann Trumhall promises to rid the valley of the scourge known as Waldric the Gore-hand, who has been terrorizing the area. Trumhall and his mabari war hound, Blacktail, were able to slay a group of bandits and win the heart of the villagers, but everything is not as it appears. The attacks are still taking place and the new Bann seems no more capable of stopping them since his election. 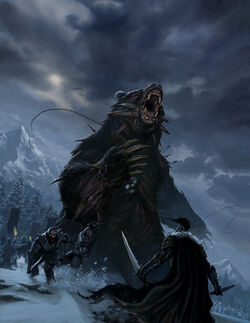 A new Blight has begun in the Korcari Wilds, driving the Chasind north and into the Hinterlands. With a new Fereldan outpost under construction, a few shamans order a raid. In gathering ingredients for poisons in a blight tainted area, the raiding party inadvertently creates a new poison which causes a highly infectious disease, the Amber Rage. This illness is reminiscent of an epidemic that occurred during the First Blight.

The Village of Southmere is hosting a groundbreaking festival to celebrate the new fort. Performers have gathered to offer entertainment and the nearby village is also in attendance. The ragers attack the festivities and many people are infected with the Amber Rage. One elderly wise woman knows the cure discovered by the Alamarri during the First Blight, if the PC can acquire the elusive ingredient, Shadowmoss.

Unfortunately, other nearby settlements have been accosted, and others are out hunting for the same cure. The decisions made by the Party will impact who lives, and who dies.

The story offers up suggestions for a few plot twists that may be used to add complexity to the main story line.

Arl Wulff of the West Hills has set out on a campaign to rid his lands of a new darkspawn invasion when he receives word that his daughter, Izot, has been kidnapped by Avvar. He seeks worthy adventurers to rescue his daughter while he attends to the darkspawn problem.

The Party will encounter the Avvar culture and possibly experience feuding between the clans in its search for Izot. They will encounter darkspawn as well as the native predators of the mountains. They may have opportunity to forge new alliances and to gain the attention of the Grey Wardens by demonstrating heroism in defense of the Avvar hold.

Optional subplots are provided to add complexity to the story line.

The Party finds themselves involved in the political climate within Denerim after meeting Bann Nicola Baranti. Bann Nicola is well known for her works of goodwill and charity within the city of Denerim. Unfortunately, as the party discovers, she is also involved behind the scenes in many acts of, questionable morality.

Follow her exploits, put together the pieces of the puzzle, and decide if you should be helping her, or stopping her.

Several optional subplots are provided to add depth to her level of involvement in ongoing unrest and subterfuge in Denerim.

Story insert to use while the players are staying at an inn. The Party finds themselves falsely accused of being bandits who have killed a local merchant family. Can they find the real bandits?

The Party is asked by merchants in Denerim to investigate a set of three strange robberies. It looks like blood magic may be involved.

The Party is asked to escort a Priest from the Chantry in Denerim to a village on the edge of the Korcari Wilds. Along they way they hear of (or witness) various miracles associated with Sister Stone.

Suggestions are provided for making A Fragile Web the overall plotline, and running all current adventures out of that as a larger, overall story arc. In this outline Players would start in A Fragile Web, completing Part 1: The Chantry of the Stilled Tongue and Part 2: A Warm Welcome, and then begin to work for Bann Nicola who will then send them out from Denerim on various quests for her.

It suggests completing The Dalish Curse, A Bann Too Many, Amber Rage, Where Eagles Lair, and then returning to Part 3: A Betrayal of Trust. The adventure seeds are written such that they should fall easily into this broad sweeping story arch as additional activities the Party completes while traveling for Bann Nicola.