Dragon Age: Those Who Speak is a three-part comic series by BioWare and Dark Horse Comics. It is co-written by Dragon Age lead writer David Gaider and Alexander Freed.[1] The series is illustrated by Chad Hardin, with covers painted by Anthony Palumbo.

The story expands on the plot told in Dragon Age: The Silent Grove, as King Alistair travels across Thedas to discover his father's fate. It takes place in the Tevinter Imperium and in the island of Seheron.

After the events of Dragon Age: The Silent Grove, King Alistair travels across Thedas in pursuit of the truth regarding his heritage and the mysteries surrounding the dragons. Accompanied by the pirate captain Isabela and the underworld merchant Varric Tethras, King Alistair will stop at nothing to learn the truth, even if it means battling an army of cultists single-handedly.

Aurelian Titus, a powerful Tevinter magister, attends a party in the city of Ventus[2] (formerly known as Qarinus) to which many nobles are invited. Alistair, Isabela and Varric come to the party in disguise. During the party, Varric becomes reacquainted with, and introduces Alistair and Isabela to, an old friend of his, Maevaris Tilani. Maevaris is a Tevinter magister and Varric's cousin Thorold's widow. They are also introduced to Lord Devon, who insisted on helping them once Maevaris mentioned Isabela's name.

While mingling, Devon mentions to Isabela that she "owes" him, otherwise he would tell Alistair about something involving her on the Venefication Sea, to which she replies by pulling a blade on him, insisting that "nothing happened" and telling him to walk away.

Alistair is appreciative to Maevaris, but insists she should leave as soon as Titus arrived, as he didn't want her to get into trouble. Maevaris instead tells him that she in fact loves trouble, and then mentions to Alistair that while the magisters rule Tevinter, Titus has no lands and no family, only a reputation for power and for knowing things no one else does. When Titus arrives at the party, early as Maevaris notes, Alistair suddenly confronts him about his father, Maric. This prompts the magister's men to ready their weapons. The magister uses blood magic, but Alistair uses his templar power to nullify it. Titus ordered him seized while leaving, and then a fight broke out.

Once the fight was won and most of Titus' men were dead, Alistair pointed out that they needed one alive to interrogate. Isabela chased one down, a man who attacked Lord Devon as he tried to get away.

Once the man was caught, Devon thanked her for saving his life right before she killed him herself, blaming it on the man she chased down.

Maevaris told them all to leave before the guards came. She notes that there will be questions, and it would be better if a magister were here to answer them. Before they left, Maevaris warned Varric to be careful, as Titus' mage shouted 'Manaveris Dracona' during the battle - 'Long live the Dragons' - indicating they they might have been part of a Dragon Cult.

They could not get much information from the man they captured, but managed to get a location from him, Seheron, after Varric tricked him.

Back on Isabela's ship, on the way to Seheron, they are approached by two Qunari dreadnoughts, where a Tamassran on board one of the dreadnoughts commands her men to take the ship's crew prisoner in a war camp named Akhaaz.

Isabela is interrogated by a Tamassran. The female Qunari asks Isabela about the meaning of her name and Isabela responds by asking her why is she so interested in this. The Qunari woman explains that her people give names very carefully and calls herself as Rasaan. Then Isabela reveals that her name was made by her first captain which meant "little beauty" as his idea of a joke. When Rasaan asks what happened of her captain, Isabela reveals that she killed him in an argument. The Tamassran continues asking Isabela more questions, which make Isabela explode and Rasaan responds aggressively by hitting her and she remarks that mistakes can be corrected while exiting Isabela's cell.

Varric and Alistair spent 3 weeks in a locked room with no Qunari guard speaking the King's Tongue. The dwarf mentions that Isabela once stole the Tome of Koslun, which led Kirkwall to war with the Qunari. They eventually regained their relic, but their leader, the Arishok, died in action. They are suddenly visited by an armored Qunari warrior, who says they are called by the Arishok. Alistair says the Arishok is dead and the Qunari warrior explain he was replaced by a new one. It appears that Sten, who once fought with Alistair against the Blight in Ferelden is the new Arishok. He tells his old friend that chasing Aurelian Titus is foolish and the king asks why the Qunari are after the magister. He doesn't answer and when he's leaving, Alistair is grabbing his arm to stop him and Sten punches him in the jaw and advices him to never seek to speak with him again. Alistair shouts about what happened to Isabela while Varric stops his friend from going closer to Sten again.

Back to Isabela, she reveals that her mother was a Qunari convert who sold Isabela into marriage when she refused to convert to the Qun. Following her husband's death, Isabela joined the Felicisima Armada, but began to have doubts when she discovered that the fleet transported slaves. When the Orlesian navy one day cornered the ships, Isabela-in a scene intentionally reminiscent of historical events like the Zong massacre of 1781-ordered the crew to drown the slaves in order to escape the Orlesians, who hang slavers.[3] The second time the armada transported slaves, Isabela freed them. As she was already in debt, this cost Isabela dearly, so she decided to take a job and steal the Tome of Koslun. Rasaan comforts Isabela and when Isabela still refuses to reveal her name, she strikes her and forces her face into the qamek, a glowing substance that looks like lyrium.

The third chapter starts with Rasaan trying to force Isabela's face into the qamek but the latter eventually resisting and injuring Rasaan in the process. The sounds alerted the guard outside the cell who opened the door to see what was going on. Isabela managed to slip below him and escape from the cell while stealing his dagger in the process. Eventually she made it to the cell where Alistair and Varric were held. She released them, telling them to escape, while she went to rescue her crew. In the end Isabela found her crew and told them about the dangers of trying to escape and asked them to choose whether they want to stay or come with her. Her crew decided to come with her. However before she had a chance to open up the cells, Rasaan showed up. She said that the other Qunari thought she'd try to escape but she knew her better. The enraged Rasaan didn't care anymore to convert Isabela, believing that the solution is only death which resulted in a fierce grapple.

At the same time Alistair and Varric were trying to escape while fighting Qunari guards in the way out. However in the end, Sten blocked their way and after a brief discussion he attacked them. Varric, who wasn't using his Bianca couldn't effectively assist in the fight so he tried to go back and find another way out. However when he opened the door to get back in prison, Qunari guards were waiting for him. However he cunningly told them that the Arishok and Alistair are having an honour battle so instead of attacking him and assisting their Arishok, Varric and the Qunari guards started watching the duel.

Isabela eventually managed to overpower Rasaan in their fight and was sitting on top of her while holding her dagger ready to make the final, lethal kill. She then told her that her name was Naishe but it isn't anymore. She then attacked with her dagger but deliberately missed Rasaan's head showing that she had no intention of killing her.

Alistair also defeated Sten and instead of killing him he offered Sten to work together against Titus, to which Sten accepted this time. The final scenes showed Isabela along with Alistair, Varric, Sten and her crew sailing with her restored pirate ship towards Titus' stronghold, in Seheron accompanied by two Qunari dreadnoughts. In the final scenes, Sten aboard the pirate ship, told Alistair that Titus seeks him because the blood of the dragons runs through Alistair's veins. 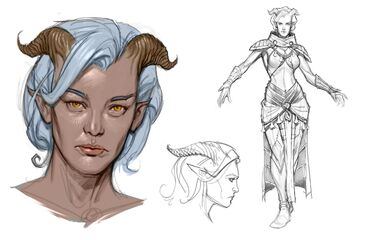 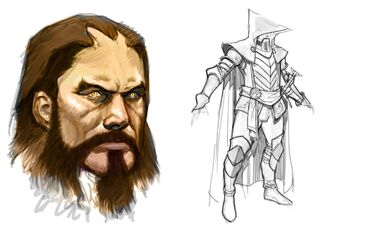 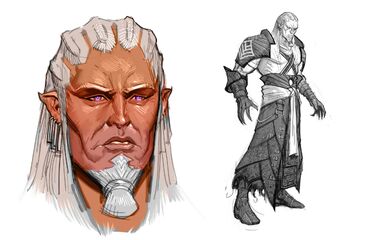 The Sten from Dragon Age: Origins as a new Arishok 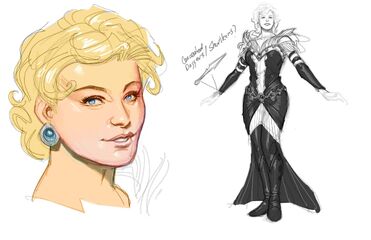 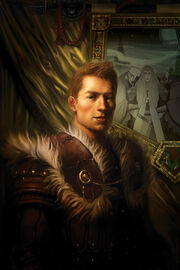 Alistair on the first issue's cover 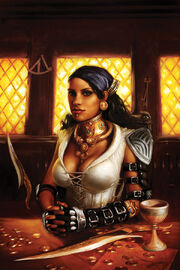 Isabela on the second issue's cover 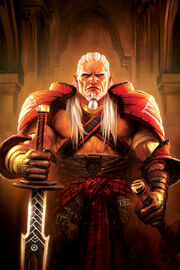 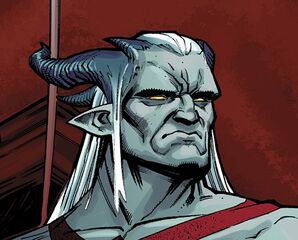