Dragon Age: The Stolen Throne is a prelude novel to the Dragon Age: Origins video game. It was written by BioWare developer and writer David Gaider to introduce the reader to the world of Dragon Age. It was published on March 3, 2009 by Tor Books. An audiobook adaptation narrated by Stephen Hoyes was released in March of 2010.

When the beloved rebel queen is murdered, her son Maric sets out on a mission of vengeance against the faithless lords who were responsible for his mother's untimely death. The nation of Ferelden that once prospered under his family's reign now suffers under the cruel hands of the invading Orlesians. His countrymen now live in fear and no one is to be trusted. Maric soon becomes the leader of a rebel army hell-bent on retaking Ferelden from the control of a foreign tyrant. With only two true allies by his side, the brash outlaw Loghain Mac Tir and the beautiful warrior maiden Rowan, Maric and his trusted band must outwit spies and traitors as they try to reclaim the stolen throne.

An Orlesian, named King Meghren sits on the Fereldan throne and Moira the Rebel Queen has been killed by traitors led by Bann Ceorlic, but her son Maric escaped. While attempting to flee the assassins who killed his mother, Maric encounters Loghain, who is part of a band of Fereldan outlaws. Having no real alternatives, Maric joins up with them.

Maric is not able to stay at the outlaw camp long, as an Orlesian force looking for him attacks. Though the camp is destroyed, Loghain is able to lead Maric to safety by taking him to the Korcari Wilds, a region avoided by most due to its dangers. They are taken prisoner by a clan of Dalish elves, who turn the pair over to the mysterious Witch of the Wilds, who enables them to pass through the Wilds safely. She provides this help on the condition that Maric makes her a promise. What this promise is remains unknown. She also warns Maric that a Blight will one day happen in Ferelden, and that Loghain will betray Maric if the young king keeps him close, "each time worse than the last".

After escaping the Wilds, Maric and Loghain meet up with Moira's rebel soldiers who are now led by Arl Rendorn Guerrin. Amongst these troops is Rowan, Maric's betrothed and Rendorn's daughter. The next few years see Maric, Loghain and Rowan become close friends as they strengthen the rebel army until it is in a position to take Gwaren, a Fereldan town. The attack is successful and the rebels conquer the town, their first real victory in years.

An elf by the name of Katriel, who claims to be a messenger, warns them of an impending attack on Gwaren and they are able to repel it. After this, Katriel and Maric begin a relationship. However, Katriel is a spy for Meghren, hired by his mage advisor Severan. She provides Maric with false information that convinces him to attack the fortress of West Hill. This attack results in massive loss of life for the rebel army, and Maric, Loghain and Rowan being separated from the remainder of the army.

Regretting her deception and developing real feelings for Maric, Katriel leads Maric, Loghain and Rowan into the Deep Roads, hoping to use the underground passages to return to Gwaren. While travelling through the Deep Roads, they fight Corrupted spiders and are rescued from a darkspawn attack by a company of the Legion of the Dead, whom Maric convinces to join his cause in exchange for glory and redemption. Once they return to Gwaren, they find the remnants of the rebel army; its morale bolstered by Maric's return, the rebel army, with the help of Gwaren's townsfolk, overcome an Orlesian army sent to destroy them and once again secure the town. With Maric thought to have risen from the dead, and the continuing cruelty of the Orlesians, there is now widespread support for Maric and the rebel cause; riots and rebellion against Orlesian rule erupt across Ferelden. Meghren tries to reinforce his rule with heavy-handed brutality, but this only incites further rebellion by the people, and goads most of his grudging supporters amongst the Fereldan nobility and the Chantry to abandon him and support Maric.

By this time, Loghain and Rowan have formed a romantic bond, but Loghain has also discovered Katriel's betrayal and reveals it to Maric. After confronting and extracting a confession from her, Maric kills Katriel, only to regret his action later. Following her death, Loghain encourages Rowan to become Maric's wife and queen, for Maric's and Ferelden's benefit. She reluctantly agrees and with increased momentum and growing support, victory is all but assured for the rebels. Maric lures the traitor nobles who murdered his mother into an ambush and executes them for their treason, before departing to kill Severan on advice left to him by Katriel before her death. At the same time, Rowan and Loghain lead the Fereldan rebels to victory over the chevaliers at the Battle of River Dane.

The novel closes with Mother Ailis, who once lived within the outlaw camp, telling Maric's and Rowan's son Prince Cailan stories of his father; that after three more years of war, Denerim fell to the rebels after a long siege, Meghren (whom the Orlesian Emperor had abandoned to his fate after the River Dane, deciding the occupation was a lost cause) was defeated and executed for his crimes against Ferelden's people and Maric crowned King. She concludes by revealing that Maric has become a popular king, Loghain has become a powerful Teyrn, married and had a daughter, and Rowan has died after a long illness. After relating this, Ailis chases after Cailan who has run off into the distance.

Some key characters in the book are as follows:

The novel features a variety of locations in Ferelden such as Gwaren, West Hill, as well as the Deep Roads. 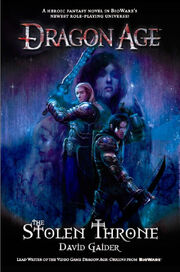 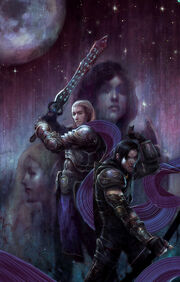 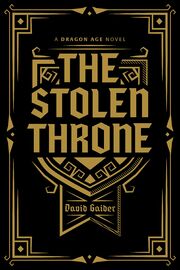