For the location in the Tellari swamps, see Silent Grove.

Dragon Age: The Silent Grove is a digital comic series by BioWare and Dark Horse Comics. It is co-written by Dragon Age lead writer David Gaider and Alexander Freed, and illustrated by Chad Hardin. The six-part comic series was released at $0.99 each, biweekly, beginning February 22, 2012.[2] The final volume was released on May 2, 2012. [3] The sequel was released on August 22, 2012.

The comic series is also included in the hardcover book Dragon Age Library Edition Volume 1, released on June 4, 2014, and in Dragon Age: The First Five Graphic Novels, released on March 2, 2021.

King Alistair of Ferelden, Isabela, a pirate raider, and Varric Tethras, a merchant prince of Kirkwall, travel to Antiva City. There the trio engineer a prison break and encounter a mysterious and feared Witch of the Wilds as they begin an epic journey to uncover one of the greatest secrets in the history of Thedas.

Alistair, Isabela and Varric arrive in Antiva City in order to infiltrate the Archive of the Crows. Alistair has hired Isabela to transport him and she recruits Varric as accompaniment. Inside the heavily guarded fortress Varric and Isabela must disarm a series of traps so that Alistair can explore the archive. The three are confronted by Claudio Valisti, Prince of Antiva and Third Talon of the Antivan Crows, who knows both Alistair and Isabela. Alistair and Claudio converse in hushed tones and Alistair explains that he broke in to the fortress because "I had to know it was real." when Claudio asks Alistair whether he is "convinced" regarding the archive and a location called Velabanchel, Alistair responds "yes" to both questions before they part ways. Alistair's party reconvenes at a brothel where Isabela attempts to warn Alistair against trusting Claudio. Alistair tells his companions he intends to break into Velabanchel with or without them.

The trio break into Velabanchel, though Varric inadvertently alerts the guards and the Qunari prison warden. Varric and Isabela keep the Crow guards occupied while Alistair pursues his target. Alistair is confronted by the warden and takes a mace wound to the arm before killing the man. Following tally marks on the walls to a cell, he enters and asks, "King Maric?" A malnourished, disheveled old man replies, "Too late. Much too late."

Alistair, Isabela, and Varric escape the Crows on Isabela's ship with the mysterious prisoner. Alistair explains to Isabela and Varric that the goal had been to rescue his father as Maric had been missing for thirteen years, but Prince Claudio had recently sent Alistair evidence the Crows had imprisoned Maric, which spurred Alistair to action. Alistair freed the prisoner because he recognized Alistair as Maric's son. The prisoner reveals to the three that he was Maric's cellmate for four years. Each day the Crows took Maric for questioning but the man never learned what the Crows wanted from Maric. He reveals that Maric was freed by Yavana, referred to by the old man as "The Beast of the Tellari swamps." The prisoner told Alistair that Maric has a message for his son: "He said he had to do it. He said he was sorry." Alistair assumes Maric referred to King Cailan and not himself, as Maric never knew him, yet is determined to find Maric.

The crew sets course for the swamps, stopping in Seleny to release the prisoner with a bag of coins. They try to hire a guide and are refused, for a pittance or a fortune no one will come. Even the crew refuses to enter the swamps. Once in the swamp the three encounter a high dragon. Alistair calls to the dragon, assuming the beast is Yavana transformed. However this is not the case, as Yavana reveals herself.

Yavana calls off the dragon, telling Alistair that it did not kill them because "She can smell the old blood in you, son of kings." The witch discusses her mother, Flemeth, and her sister, Morrigan, with Alistair. She tries to dissuade Alistair from pursuing his quest, but he urges her to tell him what happened to Maric. Yavana leads the group to the Silent Grove, a haven for dragons from the ignorance and cruelty of mankind. She says that Flemeth saved Maric's life years ago and that, as payment, "He was permitted to restore his kingdom and play ruler until his children were grown. But after, he was to come to me here." When asked whether she killed him she replies that she did not, though she cannot speak for others. She refuses to talk further and advises Alistair to abandon his quest. While exiting the marshes the group are attacked by Claudio Valisti, who explains that he needed to use Alistair to lead him to the Silent Grove, a location his master has been searching for but has been unable to enter due to the danger of the dragons. Claudio attempts to seize Alistair and Alistair allows himself to be taken in exchange for his companions' lives. Isabela vows to track down Claudio and kill him.

Isabela and Varric retreat to the Silent Grove, where Isabela demands Yavana rescue Alistair. The witch says it is none of her concern, though Varric attempts to reason with her by bargaining for her aid. Without warning she heals the pair of their wounds and tells them to go and save Alistair. When asked what she will gain from the bargain she simply says that the two will "do your part."

Meanwhile in Claudio's camp Alistair is held prisoner. Alistair and Claudio discuss Maric and Claudio prepares to reveal information about what happened to Maric after he came to the swamp, but Varric and Isabela storm the camp and interrupt the conversation. Isabela duels Claudio, Claudio arguing that Isabela was not good enough for her late husband, Luis, a close friend of Claudio's, whom she had assassinated. Claudio is about to stab the bested Isabela when she cuts off his hand and slits his throat. Alistair orders her to stop but she kills Claudio anyway, stabbing him in the heart. The king then explains that Claudio had information about Maric which is now lost. Yavana then appears and says that "the truth is never out of reach."

Yavana summons back Prince Claudio Valisti's spirit from the Fade to interrogate him. After she threatens him with perdition, bound to his corpse, the spirit reveals the name of his master, Aurelian Titus. Intrigued, Alistair asks who the master is exactly; Yavana refuses to reveal any more details, other than that she had sought the name for a very long time now. Alistair points out that without their help she would not have learned the name.

In light of their contribution Yavana leads them back to The Silent Grove, and allows Alistair alone to follow her down into the pit within her sanctum. Watched by a dragon, they enter a huge cavern bathed in a blue glow and full of crystalline eggs. Yavana explains that they are in the Hall of Sleepers: when dragons were almost extinguished the few that remained were called by the builders of the temple to rest in it until awakened by power. Yavana revived a few that didn't die in their sleep and they became the first dragons to roam Thedas in many ages. But the Great dragons were beyond her reach until Maric arrived: the blood of King Calenhad in Maric called to the Queen of dragons and awakened her. She reveals that Aurelian Titus took Maric to gain the power of his blood. Yavana then asks Alistair to awaken the last of the Great ones, thus absolving Maric of his promise to Flemeth. She tempts him with the suggestion that once recovered Maric can reclaim the throne and Alistair will be free of the unwanted burden of kingship. Alistair rejects her offer, saying that his purpose is justice, and runs Yavana through with his sword. Standing over her body he explains his actions: the machinations of the Witches of the Wilds to claim Maric, taking him from Alistair, Cailan and Ferelden itself, resulted in chaos and "everything that happened to my country is because of you." Before leaving Alistair challenges the watching dragon but it does not harm him due to the power in his blood. As he leaves the cavern the dragon examines Yavana's body.

Outside, Alistair explains to Isabela and Varric that he slew Yavana and the group proceeds onward to track Aurelian Titus, Claudio's patron.

Note: According to artist Chad Hardin, Yavana is indeed dead.[4] 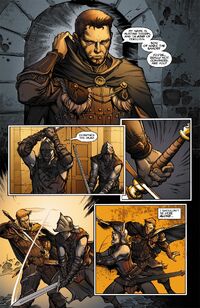 Sample of the first chapter 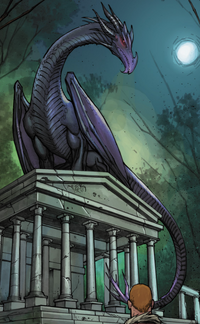 The Silent Grove in the fourth chapter 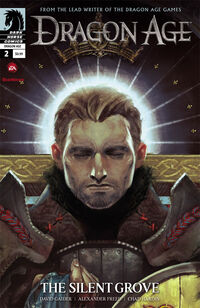 Alistair on the second issue's cover 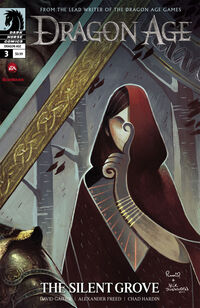 Yavana on the third issue's cover 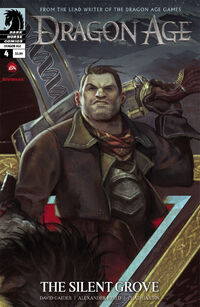 Varric on the fourth issue's cover 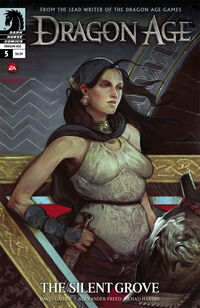 Isabela on the fifth issue's cover 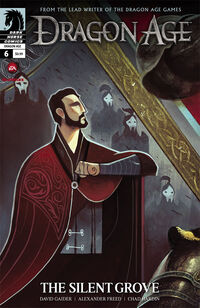 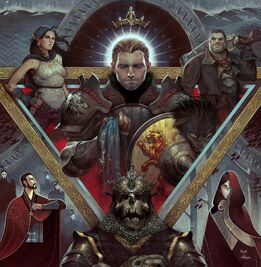 All the covers as one image