Dragon Age: The Masked Empire is a novel by BioWare writer Patrick Weekes. It was announced on March 29, 2013, and released on April 8, 2014 by Tor Books.[1] The book describes how the Orlesian Civil War began.

Empress Celene of Orlais rose to the throne of the most powerful nation in Thedas through wisdom, wit, and ruthless manipulation. Now, the empire she has guided into an age of enlightenment is threatened from within by imminent war between the templars and the mages, even as rebellion stirs among the downtrodden elves. To save Orlais, Celene must keep her hold on the throne by any means necessary.

Fighting with the legendary skill of the Orlesian Chevaliers, Grand Duke Gaspard has won countless battles for the empire and the empress. But has he fought in vain? As the Circle fails and chaos looms, Gaspard begins to doubt that Celene’s diplomatic approach to the mage problem or the elven uprisings will keep the empire safe. Perhaps it is time for a new leader, one who lives by the tenets of the Chevalier’s Code, to make Orlais strong again.

Briala has been Celene’s handmaid since the two of them were children, subtly using her position to help improve the lives of elves across Orlais. She is Celene’s confidante, spymaster, and lover, but when politics force the empress to choose between the rights of Briala’s people and the Orlesian throne, Briala must in turn decide where her true loyalties lie.

Alliances are forged and promises broken as Celene and Gaspard battle for the throne of Orlais. But in the end, the elves who hide in the forests or starve in the alienages may decide the fate of the masked empire.

The plot follows BioWare's own canon, meaning it may not follow some of the player's choices in the games.
This section contains spoilers for:
Dragon Age: The Masked Empire.

At the University of Orlais Celene meets with Sister Nightingale, the representative of the Divine, to ask that Divine Justinia V acts directly to try and ease the tension between mages and templars. Leliana and the empress agree that the Divine will make a declaration at a ball thrown in her honor in no more than a month. At a ball the same evening, Gaspard attempts to goad Teagan Guerrin, the Fereldan Ambassador, into a duel by insulting Queen Moira's memory but Celene manages to outwit him by offering her own champion, Ser Michel de Chevin, in the duel. The challenged party has the choice of weapon, and Ser Michel at Celene's behest, chooses a feather (more specifically the feather of the chevaliers). Celene believes that the situation has been resolved, but using the chevalier's symbol in this way leads some nobles to turn against her, most notably Duke Remache of Lydes. Gaspard already has another plot planned for the next day, when the nobles and Celene will go on a hunting trip. But first he needs to lure Ser Michel away from the empress. To do so he uses his bard Melcendre, who manages to lure him away when she reveals that he knows his secret that he isn't a noble at all, but actually a half-elven commoner who was taken in by the Comte Brevin de Chalons who noticed his innate skill and had his papers forged to allow him to enter the Academie and become a chevalier.

During the hunt Gaspard and Celene find themselves isolated. Gaspard asks her to marry him once again, as he believes this would be the easiest solution. When she refuses he draws his weapon on her, and Celene takes out her own daggers and manages to slash his arm. The rest of the nobles rejoin them before either of them are seriously hurt. Celene sends Briala to look for her champion. With her extensive contacts in the market district, and with the help of a Dalish mage named Felassan They manage to track down Michel and rescue him, though by that point he has already brutally killed Melcendre to try and keep his secret safe. Briala tells Michel that she will never tell anyone about his secret but that he now owes her one favor, that she can call in at anytime.

The city elves in Halamshiral start to rebel after Lemet, a well-liked elven trader, is brutally killed for throwing a rock at Lord Mainserai's coach (taking the fall for a young elven boy whose mother had also been killed by Lord Mainserai). To resolve the troubles without having to publicly choose sides, Celene sends Briala to Halamshiral to quietly assassinate Lord Mainserai. However, before Briala can carry out her mission, Gaspard and his ally Duke Remache commission a play at the Grande Royeaux Theater in which Andraste ignores the war against Tevinter after taking the elf Shartan as her lover (played by a woman), thus forcing Maferath to betray her for the good of the kingdom. The play is a clear reference to the present situation in Orlais, with Celene as Andraste, Briala as Shartan and Gaspard as Maferath. With the people already whispering that Celene is too lenient with the elves, and the Divine only offering her support once the matter with the elves has been resolved, Celene decides to march on Halamshiral to crush the elven rebellion.

Briala, unaware of the recent developments, carries on with her mission with the help of Felassan and Thren, Lemet's friend and witness to his murder. Immediately after assassinating Lord Mainserai they are challenged by the empress' men, led by Ser Michel. Felassan escapes with his magic, Thren is killed on the spot and Briala is arrested. She soon realizes that Celene has set fire to the slums of Halamshiral to end the rebellion. Just as the "battle" with the elves finish, Gaspard ambushes and routs Celene's exhausted troops, and only narrowly misses killing Celene herself. With her force completely destroyed, Celene and Ser Michel escape out of the city and try to make their way to Jader to get the help of the very loyal Lady Seryl. But the way is blocked by Gaspard's scouts and they head for Val Royeaux instead.

Briala gets captured by Gaspard but nonetheless escapes, as she meets up with Felassan again. Celene and her champion come across a village that Lady Seryl destroyed to drive out Gaspard's troops. Though Briala feels betrayed by Celene who killed her people, the two groups agree to join forces and reach a decision to get to the Dalish to try to get them on their side. Sylvans almost kill them on the way to the clan.

They find Clan Virnehn, led by Keeper Thelhen. The Dalish want nothing to do with them or their plan, nor do they care about the city elves who they do not consider to be elves at all ("flat-ears"). They are only interested in reclaiming their past, going to such lengths as to summon a demon to try and get information from him. Imshael, one of The Forbidden Ones though imprisoned, manages to lure Michel and tells him about the Eluvians. He returns to Celene and tells her; meanwhile Briala realizes that the Dalish aren't her people either and that Felassan may not even be Dalish and persuades him to help them escape and get information from Imshael. They kill many of the Dalish to get Celene and Michel out, though Michel spares Mihris, First of her clan, despite her wanting him dead for killing her love and her people.

Imshael, who calls himself a spirit rather than a demon, tells them about the network of Eluvians that can be used to travel quickly and unseen throughout the whole kingdom if activated with the right keystone. Michel unwittingly frees the demon, who massacres the rest of the Dalish clan. Afterwards, Imshael allowed Celene to keep a keystone as a token of gratitude for freeing it.

Meanwhile Gaspard has followed Celene's trail to the forest with many soldiers, his ally Duke Remache and Lienne de Montsimmard, a noble whose magic has been hidden from the Circle and is thus an apostate. Once they reach the Dalish clan they find Mihris, the only elf to have been spared by Imshael, who tells them she can lead them to Celene through the eluvians (as the demon gave her another keystone). When asked why she alone was spared, she answers that the demon was interested by Ser Michel's decision to spare her life.

Briala, Celene, Michel and Felassan are making their way through the eluvians, which basically function as portals to other worlds where reality is distorted. The humans, even Michel who is half-elven, feel extremely uncomfortable in this world where everything feels slightly off. After being attacked by corpses they are also attacked by Gaspard's group. After a fight with two revenants and an arcane horror leaves them severely weakened, they form an uneasy truce until they can reach the main chamber where the eluvians can be activated. As they reach the main chamber they are attacked by a Varterral. Duke Remache breaks the truce by attacking Celene while they are fighting the Varterral, and Gaspard promptly kills him for being dishonorable.

Celene and Gaspard agree to duel over the kingdom, with Ser Michel as her champion. The duel is going badly for Ser Michel, because Lienne de Montsimmard and Mihris, who allowed herself to be possessed by Imshael, are secretly hexing him. Once Briala kills Lienne and reveals Imshael's presence, Michel is able to gain the upper hand in the duel. However, just as he is about to kill Gaspard, Briala calls in her favor and tells him to yield, which he does, effectively losing Celene her kingdom. Briala has realized that Celene was the one who caused her parents' death, to prove her worth to Lady Mantillon and decides that she cannot be trusted with the fate of the elves. She activates the eluvians without telling anyone else the control phrase ("Fen'Harel enansal" - the Dread Wolf's Blessing) and keeps the keystone for herself. She offers the humans safe passage and send them on their way. Imshael has also left Mihris' body after an exchange in which Felassan implies that "something bigger is coming".

Gaspard and Michel reappear outside of Val Chevin while Celene finds herself back in Halamshiral, in her own Winter Palace. Though she is in a precarious position, Celene feels more confident now than she's been in a long time, and gets Comte Pierre of Halamshiral to surrender the city to her in no time. Gaspard is shown happily walking towards Val Chevin as Michel, no longer Celene's champion, dedicates the rest of his life to finding Imshael. The elves, Briala, Mihris and Felassan also go on their separate ways. Mihris asks Briala for the phrase to give the Dalish, but Briala only laughs in her face. She offers the phrase to Felassan, but he refuses to hear it. Later that night Felassan goes into a trance and finds himself in the Fade. A mysterious entity approaches him and asks him for the phrase, which he refused to hear, leading the entity to kill him.

The novel features such Orlesian locations as the royal palace, the University of Orlais, the slums in Val Royeaux and the city of Halamshiral in the Dales. 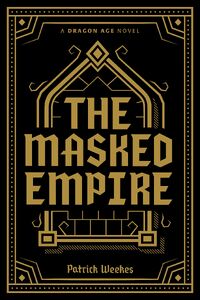 Cover art for the Deluxe Edition 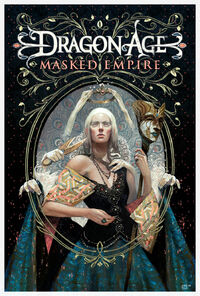