Dragon Age: The Calling is the second novel to be set in the Dragon Age universe. It was published October 13, 2009 by Tor Books. The novel focuses on Maric, a young Duncan and the Grey Wardens. It was written by David Gaider.

It is set in approximately 9:10 Dragon, eleven years after King Maric Theirin and his companions ventured into the Deep Roads as described in Dragon Age: The Stolen Throne, and eight years after the rebellion led by Prince Maric managed to drive out the Orlesians from Ferelden.

In Dragon Age: The Stolen Throne, Maric sets out on a mission of vengeance, against the faithless lords who were responsible for his mother's death. Now, having reclaimed the throne, King Maric finally allows the legendary Grey Wardens to return to Ferelden after two hundred years of exile. When they come, however, they bring dire news: one of their own has escaped into the Deep Roads and aligned himself with their ancient enemy, the monstrous darkspawn. The Grey Wardens need Maric's help to find him. He reluctantly agrees to lead them into the passages he traveled through years before, chasing after a deadly secret that will threaten to destroy not only the Grey Wardens, but also the Kingdom above.

Maric is approached by Genevieve, the Commander of the Grey of Orlais. Genevieve's brother, Bregan, has been captured by the darkspawn and, she believes, is being held near Ortan Thaig. Since Bregan knows where the Old Gods are buried, Genevieve fears that if the darkspawn gain this knowledge, they will use it to trigger a Blight in Thedas. Maric and Loghain are the only two living people to have ventured that way and Maric, despondent after the death of his wife Rowan, fleeing from what he sees as his failure as a father to his son, Cailan, and remembering a warning given to him by a mysterious witch of a Blight coming to Ferelden, volunteers to guide the Grey Wardens into the Deep Roads. Thus he comes to travel with a band of Wardens led by Genevieve including a young Duncan, an Orlesian elven mage named Fiona, the Avvar Kell ap Morgan, the Silent Sister Utha, the warriors Julien and Nicolas and Kell's dog and also Grey Warden, Hafter.

Bregan had ventured into the Deep Roads for his Calling. However, he knows the location of the Old Gods, whom the Architect, an unusually intelligent darkspawn emissary, claims to want to destroy in order to free the darkspawn from their siren call, and consequently ending the threat of future Blights. This, the Architect claims, would facilitate peace between mankind and darkspawn but concluding such a peace would demand a huge price. The darkspawn taint turns creatures into ghouls, all except the Grey Wardens who are made, at least temporarily, immune to the taint by their Joining. Mankind and darkspawn could only exist in harmony if the darkspawn taint is introduced to all mankind across Thedas. Bregan eventually agrees to assist the Architect in its plans. It later transpires that the Architect also has made new allies, among them First Enchanter Remille of the Kinloch Hold in Ferelden.

The Grey Wardens and Maric venture into the Deep Roads and find Bregan and the Architect, but not before stumbling upon the horrors of the Deep Roads, with the group suffering many injuries and losing Julien and Nicolas. However, some trinkets given to the Wardens by First Enchanter Remille allegedly to prevent the darkspawn from sensing the Wardens have instead served to rapidly accelerate the progress of the taint in them. Only Duncan, protected by an ebony-black enchanted dagger he stole from Remille, remains immune. The group is ambushed by darkspawn and nearly killed, though the Architect manages to save and take them prisoner in Kul-Baras. Eventually Genevieve and Utha agree to join Bregan and the Architect to destroy the Old Gods, though the full extent of the Architect's plans is not revealed to them.

The rest of the surviving Grey Wardens and Maric attempt to escape. Only Duncan, Fiona and Maric make it out of the Deep Roads, with Kell and Hafter sacrificing themselves to buy the others time, only to find themselves tricked and captured by First Enchanter Remille and taken to the Circle Tower which was taken over by Orlesian Circle mages and templars. There, they re-encounter the Architect, Bregan, Genevieve and Utha. It is revealed that the Architect has made a deal with Remille, offering him knowledge of darkspawn magic and Maric as a captive for the Orlesian Emperor in exchange for his help in spreading the taint in all the major cities of Thedas. However, the Architect's plans are thwarted when Loghain, having learned of the Orlesians taking over the tower, arrives with a Fereldan army to recapture it, and Bregan and Genevieve renounce the Architect's plans. Bregan, Genevieve and Remille are killed in the final showdown, but the Architect and Utha escape.

Fiona and Duncan leave to visit the Warden headquarters in Weisshaupt. Free of Remille's trinket, Fiona recovers from the artificially accelerated taint, and the Warden mages think she may actually be the first Warden to be free of it forever and thus avoid the Calling. Duncan and Fiona return to Ferelden: Duncan to be second-in-command of the Wardens in Ferelden, where Maric has agreed to their return to the kingdom after 200 years of exile despite the protests of Loghain and others, and Fiona to see Maric. She and Maric had become lovers while in the Deep Roads. Fiona became pregnant and bore Maric an illegitimate elf-blooded son, Alistair, who, like all children of elves and humans, appears fully human. She gives the child to Maric, to be raised in ignorance of the elven heritage that brought her little but pain. She returns to Weisshaupt, permanently recalled to lead the search for the Architect. Duncan, who has been appointed second-in-command of the Grey Wardens in Ferelden, offers to watch over the child in secret and ensure that he is kept safe.

For a complete list, see Category:Dragon Age: The Calling characters.

Some key characters in the book are as follows:

For a complete list, see Category:Dragon Age: The Calling locations.

The novel features locations throughout Ferelden such as the Royal Palace in Denerim and remnants of the old dwarven empire, such as Kul-Baras. 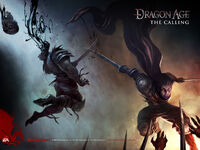 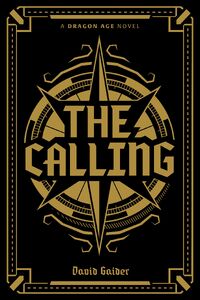 Cover Art for the Deluxe Edition