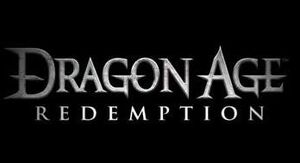 "Struggle is an illusion.

The tide rises, the tide falls. There is nothing to struggle against. Victory is in the Qun."

Dragon Age: Redemption, is a web series about an elven assassin, named Tallis, who is hunting down a renegade mage. The success of the mission is of the utmost importance to Tallis, who risks having her freedom taken away if she fails. Realizing that she can't do it all by herself, she enlists allies to help her. The series takes place in Ferelden, the same setting of Dragon Age: Origins. The story takes place at the same time as the events of Dragon Age II.[1]

The series trailer debuted on Late Night With Jimmy Fallon on February 16, 2011. The filming of the web series took place in January 2011 over the course of 12 days. Star Felicia Day is quoted as saying, "They are going to take this a step above what we have seen on the Web before."[2]

The series began airing on October 11, 2011, to coincide with release of the Mark of the Assassin DLC for Dragon Age II, in which Tallis plays a prominent role.[3][4]

Tallis, was a Ben-Hassrath, who is given the task of apprehending the rogue Saarebas by the Qunari who intends on wreaking havoc throughout the world. In her quest to find this dangerous mage, Tallis is joined by other companions Cairn, a templar, and Josmael, a mage.

Felicia Day plays Tallis and she describes her character as headstrong and sarcastic, saying that she wanted to bring a modern sensibility to the role. BioWare co-founder Greg Zeschuk said that the studio was excited to work with someone with as much passion for games as Day does.[5]

Doug Jones—who is known for make-up heavy roles, like the Faun in Pan's Labyrinth or Abe Sapian in Hellboy—will make an appearance as a Saarebas. He describes his character as the main nemesis, the bad guy in the series.[6]

The series is directed by Peter Winther, whose previous work includes production duties on Independence Day and Stargate. He's also directed a few episodes of the TV show Leverage. Lost's John Bartley is the cinematographer.[7]

Retrieved from "https://dragonage.fandom.com/wiki/Dragon_Age:_Redemption?oldid=366076"
Community content is available under CC-BY-SA unless otherwise noted.