Dragon Age: Redemption is a web series following a Qunari elven assassin named Tallis, who is hunting down a renegade Qunari mage, a Saarebas. The success of the mission is of the utmost importance to Tallis, who risks being permanently demoted in the Qunari society if she fails. Realizing that she can't do it all by herself, she enlists allies to help her. The series takes place in the Free Marches at the same time as the events of Dragon Age II. [1]

The trailer for the series debuted on Late Night With Jimmy Fallon on February 16, 2011 and the filming took place in January 2011 over the course of 12 days.

The series began airing on October 11, 2011, to coincide with release of the Mark of the Assassin DLC for Dragon Age II, in which Tallis plays a prominent role.[2][3] The remaining five episodes were released on a weekly basis for the following five weeks, the series is contained within six episodes.

This section contains spoilers for:
Dragon Age: Redemption.
In Kirkwall, sometime between 9:31 and 9:34 Dragon, Tallis, demoted to the role of a worker, an Athlok, is given opportunity to redeem herself, and thus regain her former title and rejoin the ranks of the Ben-Hassrath. She is tasked by her Qunari superiors to apprehend a rogue Saarebas, who was captured and imprisoned in a secret Chantry prison by the templars, but managed to break out of captivity. The Saarebas embarks on a rampage to perform a dark ritual, wreaking havoc along the way. In her quest to find this dangerous mage, Tallis is joined by a templar named Cairn, who is also tracking the mage; a Dalish First to his clan, Josmael; and Nyree, a reaver mercenary from Nevarra.

Tallis is given the task of retrieving an escaped Saarebas. Templar Cairn is also after the mage.

Tallis and Cairn visit a Dalish camp attacked by the Saarebas.

A Dalish mage Josmael joins Tallis and Cairn in their hunt for the Qunari. The party confronts Saarebas and get trapped in a cave.

Tallis recruits Nyree who tells them of the Saarebas's plans. They rest at an inn where they are attacked by mercenaries.

Cairn reveals the truth about his actions, Josmael leaves the party.

The final showdown, the party confronts the rogue Saarebas atop Sundermount.

Felicia Day plays Tallis and describes her character as headstrong and sarcastic, saying that she wanted to bring a modern sensibility to the role. BioWare co-founder Greg Zeschuk said that the studio was excited to work with someone with as much passion for games as Day has.[4]

Doug Jones, who is known for make-up heavy roles such as the Faun in Pan's Labyrinth or Abe Sapien in Hellboy, makes an appearance as a Saarebas. He describes his character as the main antagonist in the series.[5]

Greg Aronowitz was responsible for special effects, props, and make-up. He crafted the weapons used and the armours worn in the series.

The series is directed by Peter Winther, whose previous work includes production duties on Independence Day and Stargate. He's also directed a few episodes of the TV show Leverage. Lost's John Bartley is the cinematographer.[6] 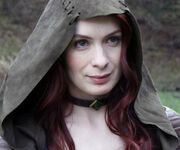 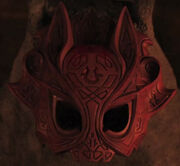 The Mask of Fen'Harel