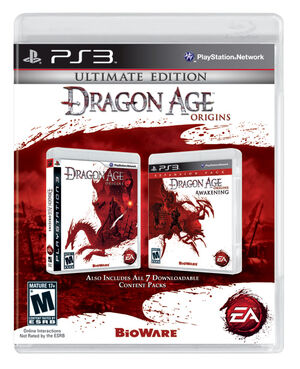 The ultimate edition contents are on 2 DVDs for the PC and Xbox 360 or 1 Blu-ray disc for the PS3 and is packaged in a regular plastic case. The game comes with patch 1.04.[2]

Most copies of the PS3 edition lack instructions as to how to install the DLCs. They will not be automatically installed and must be manually installed. A second disc icon will appear on the main PS3 control screen underneath the main icon for Dragon Age (if the PS3 is set to automatically load a disc, you may need to hit the PS3 button, quit the game and return to the top menu.). Awakening, the Blood Dragon Armor and each DLC must be installed separately.