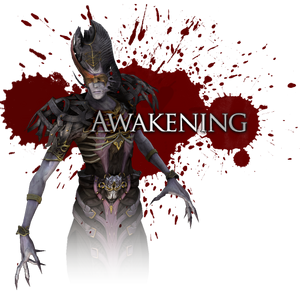 "For centuries, the Grey Wardens—the ancient order of guardians, sworn to unite and defend the lands—have been battling the darkspawn forces. Legend spoke that slaying the Archdemon would have put an end to the darkspawn threat for centuries to come, but somehow they remain."

The events of Awakening begin six months after the conclusion of Dragon Age: Origins, specifically on the seventeenth of Ferventis.[2] The player takes on the role of a Grey Warden commander, who is either an imported character from Origins or a new Warden from Orlais. The Orlesian Warden is treated differently because of the history between Orlais and Ferelden—and because an imported Warden will be renowned to begin with, having killed an archdemon almost single-handedly in Origins.

While rebuilding the Grey Wardens and establishing Vigil's Keep, a fortress given to the Grey Wardens at the end of Origins, as a new base of operations, the Warden-Commander is faced with a new challenge. It is revealed that despite the defeat of the archdemon, the darkspawn have not returned underground and a new variety of sapient, speaking darkspawn have been discovered. Two entities, named the Architect and the Mother, appear to be involved and the Warden may have to deal with them. Once this mission is complete, the world will have changed dramatically.

Differences between Origins and Awakening

Importing an Origins Warden versus creating an Orlesian Warden