Dragon Age: Knight Errant is a five-part comic by BioWare and Dark Horse Comics. It is written by Nunzio DeFilippis and Christina Weir and illustrated by Fernando Heinz Furukawa.[1]

It tells the story of the elven thief Vaea, who arrives in Kirkwall just in time for the appointment of the city's latest Viscount, Varric Tethras.

The comic series is also included in the hardcover book Dragon Age Library Edition Volume 2, released on October 16, 2018, and in Dragon Age: The First Five Graphic Novels, released on March 2, 2021.

“Elven squire Vaea and her knight arrive in Kirkwall for Varric Tethras’ appointment as Viscount. A talented thief, Vaea takes on an easy job... but when she chooses to change the terms of the deal mid-heist, she is entangled in a dangerous mission that is surely above her pay grade.[2]”

Ser Aaron Hawthorne and his elven squire Vaea arrive in Kirkwall to attend the ceremony for the appointment of the new Viscount, Varric Tethras, and convey King Alistair's congratulations. Varric personally welcomes them when their ship arrives and accompanies them to their inn, the best in Hightown. Varric greets Ser Aaron as the teller of the best stories on the other side of the Waking Sea, while Ser Aaron praises Vaea's skills as a squire.

While Ser Aaron settles at the bar of the inn, Vaea goes to prepare his room. However, she quickly leaves the inn to go to The Hanged Man, where a templar who formerly served with Knight-Commander Meredith Stannard, Ser Nevin Faramore, is waiting for her. He wishes to hire her skills as a thief to steal a box containing bribes from the Gallows. He has the key to unlock the box and proposes to split the profits with Vaea once she retrieves it.

Vaea quickly accomplishes her task, stealing the box unnoticed by the guards patrolling the Gallows. She returns to Hightown, where Varric is waiting for her. He hints that he knows she is more than an ordinary servant, and offers to escort her back to the party to check on Ser Aaron, who is telling the story of how Vaea became his squire.

Ser Aaron defended the City elves of the arling of Edgehall from Arl Gell Landon's destruction of their Vhenadahl. Gell had had their Tree cut down and burned in front of them after the elves protested their treatment by the Arl, and after a Dalish clan offered a sapling for a new tree had it confiscated. A city elf stole the sapling back (a young Vaea, though Ser Aaron doesn't mention that fact); the Dalish threatened to attack. Aaron forced the Arl and the Dalish to stand down and ensured the tree was returned to the Edgehall alienage. King Alistair ordered the sapling not to be touched, to protect it, and the construction of a wall around the alienage. The elves there threw him a feast and so impressed him with their kindness and generosity that he took Vaea on as a squire in the hopes her successes would be shared with her people.

Vaea doesn't stay at the party very long. She goes back to the Hanged Man, steals the key from Ser Nevin, and gives the money to a grateful elf in the alienage. She then plans to go back to the inn, wake Ser Aaron and leave as fast as possible. However, on her way back from the alienage, she is confronted by Charter, who warns her that stealing from templars is against the law, but lying to the Inquisition is worse. She asks that Vaea help rescue two Inquisition agents in Starkhaven. In exchange, Charter offers to help Vaea dealing with Ser Nevin. While Vaea initially refuses, a later confrontation with Ser Nevin and Ser Aaron's announcement that they must attend Sebasian's birthday party in Starkhaven force her hand.

Varric accompanies them to Starkhaven, and reveals that though he has officially left the Inquisition, he still helps them when they need him. While Ser Aaron and Varric attend Sebastian's party - where Ser Aaron quarrels with Professor Cedric Marquette, who accuses him of being responsible for the wave of thefts that has swept over Thedas - Vaea successfully jailbreaks the two Inquisition agents: Marius and Tessa Forsythia. They tell her that their mission was to steal notes on red lyrium from Prince Sebastian Vael. As they were injured upon their capture, they are unable to complete their mission and ask that Vaea do it for them. Once again, she initially refuses. She changes her mind after overhearing Ser Aaron tell Varric that he tells stories to remind people that every action has a chance to make a real difference. Just as she gets back to the palace, the guards sound the alarm, having discovered that their prisoners are missing. Vaea must now rely on Tessa's notes rather than patrol schedules to successfully steal the journal, which Sebastian keeps in his own chambers.

At the party, Ser Aaron, having returned after a short walk with Varric to clear his head, once again quarrels with Professor Marquette. The Professor finally leaves the party when Seneschal Granger defends Ser Aaron's honor. However, Granger quickly accuses Vaea of being the thief, an accusation Ser Aaron doesn't take well. Granger informs him that there has been a jailbreak, pointing out that Vaea has not been here all evening. Before the situation gets more heated, Granger is called to investigate a disturbance.

The palace has been infiltrated by Venatori agents in search of the red lyrium journal. It is revealed that Professor Marquette is working with them, having been hired by a magister because of his access to Sebastian's birthday party. He commands the Venatori to stop killing the guards - Marquette's earlier arguments at the party were designed to cast suspicion on Vaea, and killing too many guards will make it harder to pin their crime on one woman.

Despite the heavy presence of guards and Venatori, Vaea manages to get to Sebastian's chambers first and successfully pockets the journal. As she turns to leave, she is caught by Seneschal Granger, who accuses her of slaughtering the guards. Just as he grabs her and starts leading her towards the cells, Ser Aaron knocks him out. He demands explanations from Vaea at sword point.

As Vaea begins to explain herself, Ser Aaron reveals that he's always known she was a thief. He also knows that what she steals ends up in the hands of those less fortunate than her, and that those she steals from generally deserve it. He does express surprise that Vaea would steal from Sebastian, by all accounts a kind and generous ruler. She tells him that stealing from Sebastian is the Inquisition's mission; Ser Aaron expresses happiness upon learning that Vaea has found a cause. They are interrupted by Marquette and his Venatori. Ser Aaron tells Vaea to take the journal to the Inquisition and find a new life as he takes on the dozen Venatori on his own. Marquette chases after her; Vaea manages to knock him unconscious.

After Ser Aaron successfully handles the attacking Venatori, he is immediately confronted by Seneschal Granger and surrenders to him. Though the Seneschal attempts to avoid a diplomatic mess by putting all the blame on Vaea, Ser Aaron confesses to the thefts, saying that he was aware and approved of her activities, and asks that Vaea be exonerated and given the chance for a fresh start. Vaea, who has been listening to their conversation, makes herself known just before Granger brings Ser Aaron to Sebastian. She claims to have caught the journal's thief - Cedric Marquette - on Ser Aaron's orders, who was suspicious of the Professor's intentions and sent her to keep watch. She also says that the journal has already been spirited away by one of his men. Though Granger isn't sure whether or not to believe her story, Sebastian does and commends both Vaea and Ser Aaron for their bravery and expresses his eternal gratitude. Ser Aaron then vows to follow whoever stole the journal wherever they may lead.

Ser Aaron and Vaea quickly leave the palace before Marquette can wake up and contradict their story. Ser Aaron tells Vaea that they will eventually have to give the journal back to Sebastian. Once outside of Starkhaven, they meet up with Charter and Varric. As the journal revealed that the Tevinters may already possess red lyrium, Vaea offers to go to Tevinter for the Inquisition to investigate. To her surprise, Ser Aaron intends to follow her there, reminding her of his pledge to follow whoever stole the journal. Vaea readily agrees, but takes his wineskin and throws it by the side of the road. 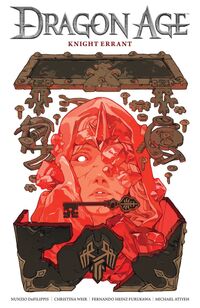 Cover of the first issue 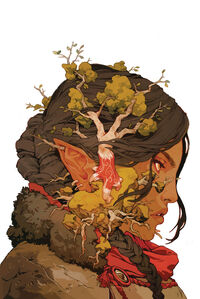 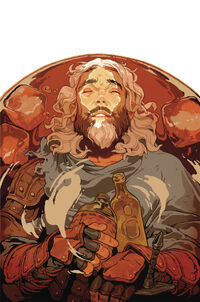 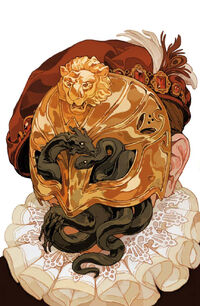 Cover of the fourth issue 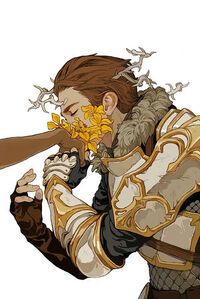 Cover of the fifth issue