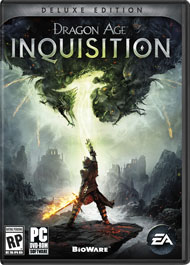 In addition to the base game, the deluxe edition includes:

The promotional items that match your starting class will be available in the Special Shipments chest upon waking in Haven:

Retrieved from "https://dragonage.fandom.com/wiki/Dragon_Age:_Inquisition_Deluxe_Edition?oldid=859636"
Community content is available under CC-BY-SA unless otherwise noted.