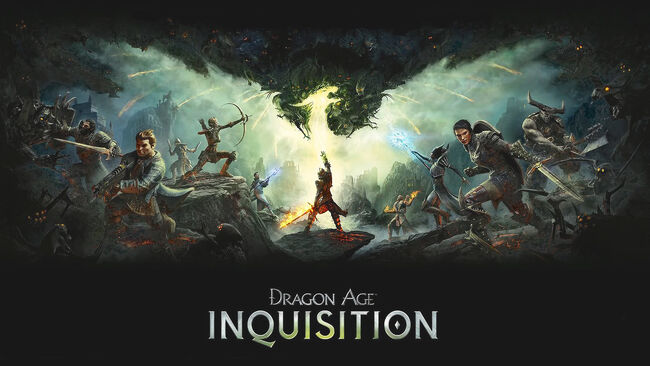 On the evening of May 19th, 2011, BioWare Creative Lead Alistair McNally informally announced the game via Twitter.[3]

The title was formally confirmed as Dragon Age III: Inquisition on September 17th, 2012 in an open letter by Executive Producer Mark Darrah.[4]

The European release for these platforms was delayed until November 21st2014 in Europe.[7]

Also, on December 15th, 2014 a Deluxe Upgrade was made available in some regions as DLC costing $9.99 USD. This upgrade essentially grants the "Inquisitor's Edition" preorder items to the Player.

Development of Inquisition began prior to the release of Dragon Age II, and it was originally conceived as a multiplayer-only game, codenamed "Blackfoot" during development.[9]

BioWare originally planned on combining elements of earlier installments in the series (Dragon Age: Origins and Dragon Age II) into the creation of Dragon Age: Inquisition.[2]

Combat also differs somewhat from its predecessors, focusing more on a player's ability to prepare, position and form a cohesive team with their party members, requiring fewer repetitive finger strikes and more tactical thinking.[10] The armor customization also differs from both Dragon Age: Origins and Dragon Age II, in that each party member has interchangeable armor pieces that customize the look according to its specification and class.[11] Reuse of environments is avoided: a common criticism of Dragon Age II.[12] Cinematic designer Jon Perry said that "one level in Dragon Age 3 is as big as all of the levels in Dragon Age 2."[13]

Regarding character creation, the advent of multiple playable races by necessity requires different body and armor models for the protagonist.[16] This aspect, according to Mike Laidlaw, takes precedence over any potential body shape choices or sliders in the Inquisition character creator.[17] Additionally, according to David Gaider, Inquisition features more race-specific content than was planned for the protagonist backgrounds originally designed for the game.[18]

According to Aaryn Flynn from BioWare, the narrative of Dragon Age: Inquisition will involve investigating a tear in the Veil, a breach into the Fade.[19]

The protagonist of this installment will be known as the Inquisitor, following the player characters of previous two games: the Warden, the Warden-Commander, and the Champion.[19] As was the case in Dragon Age: Origins, players will be able to choose from multiple races, including a new playable race that was not available in the first game. With four playable races available this time for the Inquisitor, and the game will recognize race flags, class flags, or a combination of the two depending on the situation. There would be no option, however, to create a dwarf mage for lore reasons.[20][21]

The game will be set in Thedas, covering parts of Orlais and Ferelden.[22] The game will cover more geographic territory than its predecessors, with one map being described as four to five times the size of Ferelden, the setting of the first game in the series.[10]

Mike Laidlaw and Cameron Lee have stated that the main quest alone will be 50 hours long and sidequests are 100 hours long, making a total of 150 hours of gameplay overall. Choices made by the players will impact the game's ending, with 40 different variations reported to be present, from a best to a worst possible outcome.[20][23]

BioWare mentioned that the main plot will be "saving the world from itself," sealing the Breach and defeating the Elder One.[24] The plot will also involve the Mage-Templar War, the foundations of which comprise the main plot of Dragon Age II. Along with the larger size of the game map, the player will be able to travel to various areas to either calm or encourage the fighting.[10]

The subtitle Inquisition has been previously hinted by the Dragon Age 2 strategy guide's epilogue, which asked "Will some kind of inquisition be at the heart of events of the next Dragon Age title?"[25] David Gaider has also said, "It'd be interesting to see if the Inquisition ever rose up again."[26]

On August 28, 2013, it was announced that players will be able to create their own specific canon and customize all important decisions from previous games in a cloud-based system called Dragon Age Keep. This new system will prevent plot logic issues that have occurred when importing save-games in other titles.[27][28]

The Keep system aims to allow the player to customize cross-generational and cross-console world-states, ideally circumventing import bugs or other issues. According to Mark Darrah, BioWare is looking into the possibility of traditional save game transfers via the Keep, as well.[29] Unconnected consoles will not be able to access the Dragon Age Keep,[30] though it will be able to be downloaded onto a PC or tablet initially and then introduced to a console.[31]

Players who do not have or choose not to import a world-state into Inquisition will be provided a default "canon" as in Dragon Age II: an "Ultimate Sacrifice" Dalish Warden, Alistair made King, and Hawke a male mage who sided with the mages in DA2.[32] Mark Darrah and Aaryn Flynn indicated as well that choices from Dragon Age: Origins - Awakening and other DLC will also impact playthroughs.[33][34] The prologue of the game is designed in a manner that players new to the series will not be overwhelmed.[35]

Players will not be able to directly import save files from previous games into the Keep, regardless of the platform the games were played on. However, Inquisition save files will import into the Keep if you're online while playing (or they will import next time you go online).[36][37]

The game starts in 9:41 Dragon, one year after the events of Dragon Age II and ends in 9:42[38]. Orlais is undergoing a civil war, threatening the stability of southern Thedas. The Circle of Magi have rebelled against the oppressive templars in a bid for independence, leading to all-out war . In a last ditch effort for peace, Divine Justinia V has orchestrated the Divine Conclave- a peace summit between the ambassadors of the templars and the rebel mages for the purpose of negotiating a peaceful compromise. A massive explosion kills the attendants of the Conclave and creates a massive tear in the Veil called The Breach, allowing Demons to invade Thedas unchecked. The player protagonist is the sole survivor of the explosion and wielder of the "Anchor"- a magical mark that bestows control over the Breach and Fade rifts. The player's miraculous accolades and ability to seal the Fade rifts leaves many to believe they are a messiah, specifically the Herald of Andraste. The player is inducted into the reborn Inquisition- an independent organization sanctioned by the late Divine Justinia to restore order should Thedas erupt into chaos- and eventually becomes its Inquisitor. Throughout the game the Inquisitor will be forced to make choices that directly impact the plot of the game. The actions of the player shake the very foundation of Thedas as it leads to the ultimate build up against an evil ready to usurp the throne of the Maker Himself.

Although touted as an "open world" game at E3 2013 presentation, the developers quickly clarified that Inquisition will not be open world in the same way as The Elder Scrolls V: Skyrim, but instead simply feature larger locations (than, presumably, Origins and Dragon Age II) with more exploration freedom.[43] There are 10 large "open world" locations in the game. Gameplay continues post story completion, as opposed to retroactive DLC such as in Dragon Age II.

As in both previous installments, the player character can be one of three classes: warrior, rogue, or mage, with three specializations for each available later in the game. The player has the ability to choose one of 4 playable races - human, dwarf, elf or qunari - of either male or female gender. Body sliders are unavailable to customize the player character's physique; rather, the engine supports differing body shapes for each race.[45] Two voice sets are available for each gender: in the English-language version of the game, one has a British accent, and the other an American one.

Like the Warden, the Warden-Commander, and Hawke in previous titles, the Inquisitor can recruit companions. There are a total of 9 possible party members that can be recruited. All companions can be customized via armor and in-class weapon style.

According to Mike Laidlaw, as in Dragon Age: Origins, the Inquisitor can speak to companions as desired, though not necessarily in every location.[46]

Also according to Mike Laidlaw in an interview with Eurogamer, companions leave the party if approval ratings are too low, similar to Dragon age: Origins, and it is possible to only have one companion remaining in the end. It's also possible for the companion to betray the Inquisitor depending on the choices made by the player.

While playing, the GUI for Dragon Age: Inquisition includes a radar displaying important points and foes. Mike Laidlaw stated that it's better for battles.[47] The game can be played using a tactical camera view (where the party is controlled from overhead), or from the third person.[35]

Combat in Dragon Age: Inquisition has a greater focus on strategy than does Dragon Age II. Party health doesn't regenerate automatically after an encounter as it did in Dragon Age II and Dragon Age: Origins, and mage characters will not be able to repeatedly cast, or "spam," healing spells. Similarly, the ability to carry healing items will be limited, to instill a need to adequately prepare for combat and exploration.[48]

With regards to the PC edition of Inquisition, Laidlaw revealed that the tactical quickbar will be locked at 8 slots, because "32 abilities (along with passives/upgrades) across the party provides a broad spectrum of tactical options."[49]

During fights, the environments may be exploited and manipulated to a greater degree than in Dragon Age II. This capacity goes both ways, however. For example, a mage character may cast an "ice wall" spell to create cover on a battlefield or hem an enemy into a corner—a similar idea to a mage casting a fire spell after using a grease spell in Dragon Age: Origins—but the enemy may respond by melting the ice wall, eliminating the player's advantage.[48]

Dragon Age: Inquisition will feature a four player co-op mode. At launch there will be three multiplayer campaigns. Maps will be randomly generated and BioWare expects the matches will last between 20–30 minutes.[50]

Initially there will be twelve heroes to choose from, four rogues, four warriors, and four mages. All will have distinctive looks and abilities. The player will be part of the Inquisition, running a behind the scenes operation.[50]

There will be no subscription or premium services. However, you can purchase platinum, which is described as a "time saver" currency.[50]

Equipment
A list of available weapons, armor, runes, upgrades, and crafting items can be found on the BioWare Social Network.

Crafting returns in Inquisition, which according to Cameron Lee, is the deepest BioWare has ever created. In addition to crafting items from raw materials, players can create different parts of the final product and then combine them (e.g. different sections of a staff may be crafted before combining them). The materials used to create the item determine its appearance.[35]

According to the developers, Dragon Age: Inquisition has 88,000 lines of voiced dialogue and there are nearly 1 million voiced and written words in the game.[53]