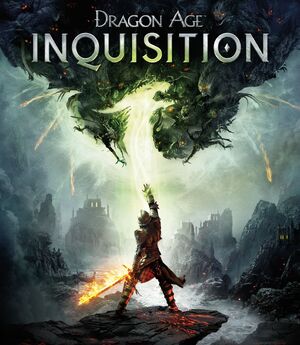 BioWare is planning on combining elements of earlier installments in the series, Dragon Age: Origins and Dragon Age II, into the creation of Dragon Age: Inquisition.[3]

Combat is also expected to differ somewhat from its predecessors and focus more on a player's ability to prepare, position and form a cohesive team with his or her party members, requiring fewer repetitive finger strikes but better thinking.[8] The armor customization will differ from both Dragon Age: Origins and Dragon Age II, in that each party member will have interchangeable armor pieces that will customize the look according to its specification and class.[9] They will also refrain from reusing environments, a common criticism of Dragon Age II.[10] Cinematic designer Jon Perry said that "one level in Dragon Age 3 is as big as all of the levels in Dragon Age 2."[11]

BioWare will use a brand new engine which will use Frostbite 3 as a foundation.[12]

It has been confirmed by David Gaider that the Game will feature "multiplayer in some form." It is not known yet what the multiplayer element will be.[13]

The game will have creatures new to the series.[14]

Regarding character creation, the advent of multiple playable races will by necessity require different body and armor models for the protagonist.[15] This aspect, according to Mike Laidlaw, will furthermore take precedence over any potential body shape choices or sliders in the Inquisition character creator.[16] Additionally, according to David Gaider, Inquisition will feature even more race-specific content than was planned for the protagonist backgrounds originally designed for the game.[17]

Although touted as an "open world" game at E3 2013 presentation, the developers quickly clarified that Inquisition will not be open world in the same way as The Elder Scrolls V: Skyrim, but instead simply feature larger locations (than presumably Origins and Dragon Age II) with more exploration freedom.[18] There are 10 large "open world" locations in the game.[19] Gameplay will continue post-story completion, as opposed to retroactive DLC such as in Dragon Age II.[20]

As in both previous installments, the player character can be one of three classes; warrior, rogue or mage. The player will have the ability to choose one of 4 playable races - human, dwarf, elf or qunari - and of either gender. Body sliders will not be available to customize the player character's physique; rather, the engine will support differing body shapes for each race.[22] Two voice sets will also be available for each gender: in the English version, one will have a British accent, and the other an American one.[23]

Like the Warden, the Warden-Commander, and Hawke in previous titles, the Inquisitor will be able to recruit companions. It has been revealed that there will be nine possible party members in total.[24] All companions can be customized via armor appearance and in-class weapon style.[25] Furthermore, in exploration they will assist the player by calling out sights of interest.[25]

According to Mike Laidlaw, as in Dragon Age: Origins, the Inquisitor will be able to speak to companions as desired, though not necessarily in every location.[26]

According to Mike Laidlaw in an interview with Eurogamer, companions will leave the party if approval ratings are too low, similar to Dragon age: Origins, and it is possible to only have one companion remaining in the end.

Part of the gameplay of Inquisition involves obtaining and maintaining power in various regions of the map. In part, this is done through strongholds, which can be seized and upgraded to accomplish various tasks, and which serve as a hub for promoting the interests of the Inquisition.[25]

While playing, the GUI for Dragon Age: Inquisition will include a radar which displays important points and foes. Mike Laidlaw has stated it's better for battles.[27]

Eliminating other NPCs, including wildlife, will also have an effect on gameplay in Inquisition. The player will have the ability to forage or hunt an area into scarcity, which will allow other species of plants and animals to proliferate instead. Furthermore, clearing an area of intelligent enemies like bandits or dragons will impact the locale greatly.[29]

Mike Laidlaw confirmed the ability for players to import their save files, or alternatively their "world-states," from the first two games into Dragon Age: Inquisition to "shore up world consistency."[30] Mark Darrah later stated that BioWare is looking into creating ways to include choices made in previous titles without the need for a Save File transfer system, as well as a method to import save files across console generations.[11]

Players who do not have or choose not to import a world-state into Inquisition will be provided a default "canon" as in Dragon Age II: an "Ultimate Sacrifice" Dalish Warden, Alistair made King, and Hawke a mage who sided with the mages in DA2.[36] Mark Darrah and Aaryn Flynn indicated as well that choices from Dragon Age: Origins - Awakening and other DLC will also impact playthroughs.[37][38]

The game will be set in Thedas, covering parts of Orlais and Ferelden.[42] The game will cover more geographic territory than its predecessors, with one map being described as four to five times the size of Ferelden, the setting of the first game in the series.[8]

BioWare mentioned that the main plot will be "saving the world from itself." The plot will involve an all out war between mages and templars, the foundations of which comprise the main plot of Dragon Age II. Along with the larger size of the game map, the player will be able to travel to various areas to either calm or encourage the fighting.[8]

The subtitle Inquisition has been previously hinted by the Dragon Age 2 strategy guide's epilogue, which asked "Will some kind of inquisition be at the heart of events of the next Dragon Age title?"[45] David Gaider has also said, "It'd be interesting to see if the Inquisition ever rose up again."[46]

There are eight[61] romances available in Inquisition, including some companions, as well as supporting characters. Some romances may be restricted by gender[62], and two have been confirmed to be restricted by race (though who they are is still unknown)[63].

Retrieved from "https://dragonage.fandom.com/wiki/Dragon_Age:_Inquisition?oldid=592695"
Community content is available under CC-BY-SA unless otherwise noted.