Dragon Age: Dark Fortress is a three-part comic by BioWare and Dark Horse Comics. It is written by Nunzio DeFilippis and Christina Weir and illustrated by Fernando Heinz Furukawa.

The comic series is also included in the hardcover book Dragon Age: Wraiths of Tevinter, released on August 23, 2022.

“For Fenris' latest adventure, he is joined by Inquisition agents to prepare for an assault on an unbreakable fortress in yet another effort to save Thedas from unimaginable horrors. Can Fenris and this hardened group of warriors make it in time to stop Thedas from the verge of collapse once more?[1]”

Magister Nenealeus, Shirallas, and Cedric Marquette are welcomed into Castellum Tenebris by Tractus Danarius, the bastard elf-blooded child of Magister Danarius. In the fortress, Nenealeus plans to use Danarius' sarcophagus to imbue Shirallas with red lyrium, then arm him with a sword made by the lyrium idol that Marquette retrieved for House Qintara. Nenealeus believes that the ritual should make Shirallas powerful enough to not only throw the Qunari out of Tevinter, but also reclaim all of the Imperium's former lands. Tractus quickly finds himself sidelined by Nenealeus, who dismisses him as an idiot and throws him out of his own fortress by threatening to use Shirallas' skills as a mage-killer.

Tractus goes to drown his sorrows in nearby Neromenian, where he is intercepted by Ser Aaron's group. While Ser Aaron, Francesca, Marius, and Tessa Forsythia act as lookouts, Vaea, Fenris, and Autumn directly confront Tractus in his room at the tavern. A fight immediately breaks out as Tractus recognizes Fenris as his father's killer, but Fenris is able to gain the upper hand. After being tortured by Fenris, Tractus reveals that the secret passage only opens from the inside and says they won't be able to make it across the bridge. He also says that the ritual will take place that same night. Having obtained the information they needed, Fenris moves to kill Tractus but is stopped by Vaea, who argues that Tractus was just a child when Fenris was last with Danarius and that they need to leave immediately, as the Qunari have just invaded the city. Fenris leaves Tractus tied up in his room for the Qunari to find. When they do, they also torture him and learn of the ritual that will take place in Castellum Tenebris and resolve to stop it and kill anyone they encounter there. Despite his injuries, Tractus successfully escapes the Qunari. They do not give chase, as they expect him to return to Tenebris.

Heeding Tractus' warning that going over the bridge is impossible, Vaea uses her significant acrobatic skills to make her way under it instead. She then opens the secret passageway for the rest of the group. As they proceed through the tunnel, Tessa and Marius question Fenris on the details of the ritual. He remembers that the ritual used a lyrium-infused sword, that it took a long time, and that the sarcophagus was pelted with spells–likely fire. He also notes that the ritual has become much faster since and therefore will likely require more than just one mage. The group readies themselves to fight several Venatori mages inside the castle. Instead, they find a chained high dragon.

While Ser Aaron, Francesca, Marius and Tessa attack Nenealeus and the Venatori directly, Vaea, Fenris and Autumn attempt to free the dragon while it is still muzzled. Meanwhile, the Qunari have massed outside the castle's gates and started heavy bombardment to bring them down. In the confusion, Marquette is able to arm the sarcophagus with the red lyrium weapon forged by the idol–a sword that should outlast the ritual, unlike the arcane warrior sword that the elder Danarius used with Fenris—while Shirallas enters the sarcophagus. Nenealeus then unleashes the dragon, which blasts the sarcophagus with dragonfire. Shirallas emerges mere moments later, covered in red lyrium markings.

Fenris decides to make a deal with the Qunari and opens the castle's gates on the condition that Ser Aaron's group will be allowed to leave the fortress after the fight. Aided by the Qunari, Fenris, Ser Aaron, Francesca and Autumn fight Shirallas while Marius, Tessa, and Vaea deal with Nenealeus. Vaea manages to kill Nenealeus while he's fighting Marius, but Shirallas' lyrium markings have made him invulnerable to damage. Marquette, who has had a change of heart after witnessing the Red Wraith's immensely destructive powers, tells the group that separating Shirallas from his red lyrium weapon should deprive him of his healing abilities. Ser Aaron engages him in a duel and is stabbed through the chest. He cuts Shirallas' hands off in return, then pushes himself off a high ledge with the weapon still in his torso to part him from his sword. Fenris deals Shirallas the final blow, cutting his head off. Meanwhile, Vaea convinces Francesca to let the dragon simply fly away and use her powers to bury the sarcophagus deep underground instead.

Vaea hurries to Ser Aaron's side for his final moments. He gives her a letter he's written to King Alistair asking him to make her a knight, then passes away. When Vaea declares her intention to take his remains back to his native Portsmouth for a funeral, Fenris, Francesca, and Autumn decide to join her. Marius and Tessa leave on their own, congratulating themselves on the relative success of their mission. However, unbeknownst to them, Marquette has fled the fortress with the lyrium idol, which Tractus takes from him under threat of death. As Tractus leaves with the idol, Solas observes him through an eluvian. 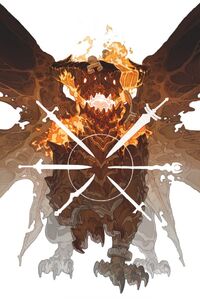 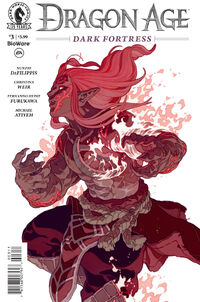