Dragon Age: Blue Wraith is a three-part comic by BioWare and Dark Horse Comics. It is written by Nunzio DeFilippis and Christina Weir and illustrated by Fernando Heinz Furukawa.

A limited edition of the first issue, with an alternate cover by Matt Taylor, was released concurrently with the regular version.[1]

The comic series is also included in the hardcover book Dragon Age: Wraiths of Tevinter, released on August 23, 2022.

“Dragon Age: Blue Wraith starts off with the fanatical Qunari seeking to topple the Tevinter magocracy. Caught in the middle, one powerful young mage’s desperate search for her father brings her face-to-face with a notorious mage hunter—Fenris, the Blue Wraith.”

Around 9:40-9:41 Dragon[2], Fenris, now known as the Blue Wraith, and his Dalish associate Shirallas free elven slaves bound for the estate of Magister Nenealeus, near Arlathan Forest. Shirallas thinks the magister wants the slaves trained as mage-killers, and volunteers to pose as one of them to learn those skills. Fenris dismisses the idea; Shirallas unhappily complies.

Four years later, Cedric Marquette flees from Carastes, recently fallen to the Qunari, with an artifact he was hired to recover and decipher by Magister Danarius. Though the Qunari are in pursuit, they are waylaid by Ser Aaron, Vaea, Marius, and Tessa, who are clearing a path so that Marquette's caravan can lead them to Castellum Tenebris, where they hope to recover the red lyrium-imbued weapon Marquette stole from Kirkwall. Calix, Francesca, and Autumn look on without participating in the fight. When Calix finally convinces her to use her magic, Francesca kills the remaining half-dozen Qunari with a single, nature-based spell.

After Francesca's stunning display of power, Calix remarks that he's glad she's on their side, to which she angrily replies that she is not, and that she still holds him responsible for the death of her brother. She thanks Ser Aaron for protecting her on the road, and takes her leave for Fort Viridan. While the rest of the group continues following the caravan, Vaea chooses to follow Francesca, as she is alone, and they might need her firepower to infilitrate Castellum Tenebris. Ser Aaron bids her take Autumn, whose tracking skills Vaea will need to rejoin the group later.

In Fort Viridan, Francesca meets up with a family friend, only to be told that her father has been abducted by the Blue Wraith. Wanting to finally prove her value to her father, she resolves to go find him herself, and asks Vaea and Autumn, who'd caught up with her just as she'd reached the fort, for help. More than Autumn's tracking ability, she believes having an elf at her side might help when talking with the Blue Wraith. Vaea, who has a mutual friend with the Blue Wraith, asks that Francesca let her do the talking. She agrees, as long as her father is neither hurt nor in danger. As they notice the corpse of a man with a gaping hole in its chest, the Blue Wraith appears, telling them it was a mistake to come.

Fenris attacks Francesca, but Vaea intervenes to stop the fight by putting herself between them. She convinces him that they only came to talk. Upon seeing more bodies, Francesca angrily asks about her father. Her question is accompanied by a powerful spell that knocks Vaea off her feet but harmlessly passes through Fenris. From her use of plant magic, rare outside the Dalish, and her evident power, Fenris recognizes her as the Invidus girl. He tells her that he didn't take her father, but that if he had, he'd have killed him for being the last of the Venatori to truly understand red lyrium.

He reveals that Shirallas took Magister Invidus, and that he's tracking them both. A year after freeing elven slaves with Fenris, Shirallas went back on his word and infiltrated a slave shipment bound for Nenealeus' estate. Nenealeus deduced his motivation for doing so and decided to train him as a mage-killer, vowing to break his spirit first.

Fenris refuses Vaea's offer of help, saying that he no longer has partners or teammates. She uses Autumn to track him regardless. They follow him to Magister Nenealeus' estate, and stop him from launching a frontal assault. Vaea convinces him to sneak in and investigate first. They learn that the Qunari have killed the Venatori guards and taken the estate. Inside, a Viddasala interrogates Nenealeus' elven slaves as to his motives and whereabouts. The slave reveals that they secured the assistance of Magister Invidus for his expertise on red lyrium. She also says that the magisters left to meet a caravan from Carastes, containing a sarcophagus that infuses elves with lyrium. Hearing this, Fenris angrily exclaims that the sarcophagus was broken beyond repair, and attacks the Qunari.

As Ser Aaron's group has been following Marquette's caravan since Carastes, they are able to spy on his meeting with Magister Nenealeus. Marquette is aware of their presence, but believed them to be protection employed by the Magister because they killed the Qunari pursuing them. When Nenealeus tells him that they're not his people, they decide to test Marquette's sarcophagus repairs to get rid of them, by using standard lyrium on a human subject. When Ser Aaron's group moves to follow the caravan, they are attacked by the wraithlike test subject, who then explodes.

Back in Nenealeus' estate, the Viddasala escapes after executing the slave he was interrogating, though the other Qunari are killed by Fenris and Francesca. After freeing the surviving slaves, Fenris asks if any of them know of Nenealeus' whereabouts, and one boy answers that the caravan the magister would be meeting was headed towards Tenebris. When Autumn offers her tracking skills once again, Fenris gladly accepts, saying that he'll work with the mabari, and that the others can join if they wish. Meanwhile, Ser Aaron's group, slowed by the test subject's attack that left his horse Cassé with an injured leg, is still attempting to follow Marquette's caravan when more Qunari appear and attack them. Fenris, Vaea, Francesca, and Autumn arrive just in time to help them.

Noticing the Qunari's arrival, Nenealeus decides to create more exploding test subjects to send after his enemies. While the rest of Ser Aaron's group stays behind to fight them, eventually letting both groups of enemies take each other out, Fenris and Francesca chase after the caravan to rescue her father. With a spell, she extracts him from the caravan as it escapes. He's far from grateful, telling her that she cost him his chance to restore the Venatori and their family and attacks her. When Fenris steps in to defend her, Francesca is forced to kill her father to save him.

After the battle, Calix tells the others that he's not built for this and leaves the group for Fort Viridan, though promising them information if they ever need it. Fenris offers to lead them to Tenebris, saying that they must hurry before Shirallas can get in the sarcophagus. Francesca heals Cassé and also joins the group. Together, Ser Aaron, Vaea, Fenris, Francesca, Marius, Tessa, and Autumn head towards Tenebris, as Ser Aaron starts another one of his tales, with Vaea's blessing. 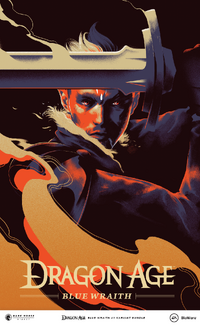 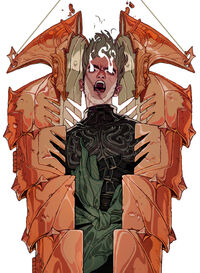 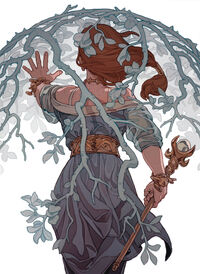