Donal Sutherland is a young man who wishes to help the Inquisition any way he can. He can be found on the second floor of the Herald's Rest tavern in Skyhold.

The Inquisition is approached to provide patrols in the area, but since resources are scarce, it is suggested that Sutherland and Voth take care of it, if Sutherland was encouraged to stay on. The Inquisitor can task them with A Patrol for the Crew. Following that, Shayd, a human archer, will join Sutherland's crew.

Hearing of Sutherland acting in the name of Inquisition, Ser Morris requests that Inquisition equips them for the sake of keeping up appearances. The Inquisitor can choose between light, medium, or heavy armour. Sutherland will love any set of armour. At this point he will flirt with Shayd.

During their adventures, Sutherland made contact with the Mining caste of Orzammar. The caste makes a request of Sutherland to rescue a missing expedition. Following the rescue of the miners, Sutherland and Company are hailed A Crew of Ambassadors. This time, the crew does not return to Skyhold, and instead they stay out in the field, becoming A Crew of Adventurers. They request that the Inquisition lets them follow some leads of possible profit on their own. The Inquisitor can either leave them to their devices, offer them Inquisition contacts, or ensure safe passage through whichever lands they need to traverse. The company succeeds, spreading the word of the Inquisition to the masses.

At some point over the course of their missions, Sutherland and Shayd start a romantic relationship.

By now, Sutherland has earned a reputation for being reliable and the company is awarded a fair share of contracts. The Inquisition must now to decide how to use this newfound increase in interest for its own interests. They can either expand on trade, enter diplomacy with neighboring lands, or strengthen the already established connections.

The Inquisitor can interact with Sutherland one last time. This time, Sutherland informs the Inquisitor that the company has plans to leave and find a keep of their own, though they will remain "an adventuring company of the Inquisition".

The plot follows BioWare's own canon, meaning it may not follow some of the player's choices in the games.
When Corypheus reopens the Breach over Haven, Sutherland's adventuring company, alongside Marius and Tessa Forsythia, are sent to clear a route up to the ruins of the temple to provide the Inquisitor with reinforcements. In the caves under the temple, they face various demons, including a massive Pride demon. When Shayd jumps on the demon's back, Tessa pushes her away and takes a shock meant for her. Though Tessa is injured, Marius and the company eventually defeat the demon and clear the passage. Sutherland's company escapes mostly unscathed.

Callback
Sutherland, now a landed knight known as Ser Donal of the Hinters, and his company are sent to investigate Skyhold after its caretakers sent a message about restoring the fresco then went silent. He suspects that his company has been sent because they are small enough to disappear. Their failure would give officials license to permanently erase the Inquisition's legacy.

They find one of the caretakers gutted, nailed to the stable by his own hand. The rest have been dismembered, their body parts hanging from the rookery's cages. The culprit quickly manifests: a demon of Regret, his body formed out of the plaster of Solas' murals to the Inquisitor. The demon has multiple eyes and looks like a wolf that has absorbed a dragon. It claims to be the regret of a god.

The demon neutralizes Voth and Shayd through their regrets, but Sutherland is unaffected because he has none when it comes to the Inquisition. Backup arrives as planned: Rat, his squire, but also Dagna, Harritt, Morris, Cabot, and Elan Ve'mal, people loyal enough to be quiet, small enough to go missing. With his friends' trust in him, Sutherland lures the demon, saying that he regrets acting alone, using his friends, and the present moment, just like the demon itself. Then the rest of Sutherland's company attack and send it back to the Fade.

To obtain each quest, Sutherland must be spoken to in the tavern.

New to the Crew: A Young Hopeful (Part I)

A Patrol for the Crew (Part II)

A Test of Mettle and the Crew (Part IV)

A Crew of Ambassadors (Part V)

A Crew of Adventurers (Part VI)

A Company of Heroes (Part VIII) 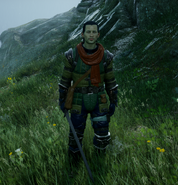 Sutherland out in the world

Sutherland in the heat of action 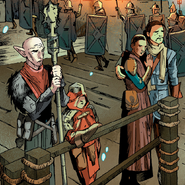 A young hopeful
Add a photo to this gallery
Retrieved from "https://dragonage.fandom.com/wiki/Donal_Sutherland?oldid=878696"
Community content is available under CC-BY-SA unless otherwise noted.