"Dog" is the default name of a male mabari war hound, a potential (and unquestionably faithful) companion to the Warden. He is a full party member, counting as a warrior with a unique talent tree and exclusive equipment. He also has party banter, occasional moments of "dialogue", a scavenging function, and a landmark interactive feature.

Dogs are an essential part of Ferelden culture, and no dog is more prized than a mabari. The breed is as old as myth, said to have been bred from the wolves who served the legendary hero Dane.

If Dog was killed...
After falling sick with the Taint, Dog was put down by the Warden.

If Dog was rejected...
Dog became infected with the Taint at Ostagar, and was saved by the Warden. Despite encountering them on more than one occasion, Dog was turned away by the Warden and was never seen again.

If the Warden is a Human Noble...
Dog joins his master's side after raiding the larder in Castle Cousland. He remains beside Duncan at Ostagar until Alistair and the Warden are sent to light the beacon atop the Tower of Ishal.

If the Warden is not a Human Noble and recruited Dog...
Dog's master was killed by darkspawn and he himself fell sick with the Taint at Ostagar, but was cured by the Warden prior to the war council. The kennel master repaid the Warden by offering to bond Dog to them, but the disaster at the Battle of Ostagar impeded this plan.

Dog escaped Ostagar and encountered The Warden again along the Imperial Highway on the road to Lothering. Dog helped defeat a band of darkspawn and was taken in by the Warden and their party. Dog remained unconditionally loyal to his master and was well-liked by his fellow companions, finding particular affinity for the Qunari, Sten.

This section contains spoilers for:
Dragon Age: Origins - Awakening.
If Dog was recruited...
Following the Battle of Denerim, Dog was sent to the Denerim kennels to help replenish the diminished number of mabari hounds. Though he was absent from The Warden's side during the Amaranthine Conflict, he fathered several litters of puppies during this time and returned to his master's side shortly after.

This section contains spoilers for:
Witch Hunt.
If Dog was recruited...
When the Warden-Commander sets off on a mission to locate Morrigan, Dog accompanies them. When they finally locate Morrigan at the Nest, Dog happily runs up to meet her.

This section contains spoilers for:
Darkspawn Chronicles.
Dog bonded with Alistair and was named "Barkspawn", accompanying his master into battle against Urthemiel atop Fort Drakon. Dog was slain by the Hurlock Vanguard.

Naturally, Dog likes bones. However, his approval starts at the cap of +100 and cannot be lowered by any means. Gifting him the Stick from Feastday Gifts will increase his dexterity attribute by +6 (matching the maximum approval-based attribute increase that other companions can receive). The Protective Cone from Feastday Pranks can be given to him as a prank (and equipped for comic effect or 'style').

See Dog talents for a list of its talents.

Dog has exclusive access to the War Dog talent tree. On the console editions of the game, it can also access warrior talents. pc

Dog has two slots for equipment, taking the place of conventional weapons or armor:

Both types can provide defensive or offensive bonuses.

There are twelve warpaints and nine collars available in Dragon Age: Origins. An additional collar and warpaint are available with Return to Ostagar. The Protective Cone, available with the Feastday Gifts and Pranks DLC, can also be equipped as a collar.

Dog can also sense 'stealthed' enemies (such as Genlock rogues) at fairly close range. The stealth is not counteracted, but there is 'in-game notification' in the form of an angry growl. In any case, only a mage has any significant response options (such as inscribing a Glyph of Repulsion to repel an initial melee attack).

Dog can be asked "Do you see anything interesting?" almost everywhere outside of camp (though not while he is injured). In most areas he will have a random chance to return with either a minor item from the generic treasure list (such as Elfroot), or one of a limited number of unique items:

There are also area-specific items he can dig up:

Codex entry: A Letter to Someone in Highever - at Lake Calenhad Docks.

Duty - in the Deep Roads (all over, but definitely a 100% drop rate early in the Dead Trenches).

Deathroot - around the Brecilian Forest and Dalish Camp.
Assorted gemstones - at the Mountain Top

Throughout Ferelden are several objects labeled Landmark (usually "Landmark tree" but there are a few exceptions). These objects may have a sparkling aura, much like containers. When a landmark is selected without Dog in the party, it has no effect. If Dog is in the party, but is not the one to select the landmark, a message hints at his interest.

When a landmark is 'marked' by Dog, Mabari Dominance is activated, providing him with bonuses of +2 strength, +2 willpower, and +2 constitution. The effect remains active while Dog is in the area, at any distance from the landmark. However, it is not applied inside buildings, even if they are within or adjacent to the landmark's location. (e.g. inside Redcliffe Castle, The Spoiled Princess, Dane's Refuge, etc.)

After Dog leaves an area where a landmark has been activated, Mabari Dominance should automatically reactivate when he returns to that location.

Note: The Dalish Camp landmark disappears if the Warden sides with the Werewolves during Nature of the Beast.

(If Dog is chosen as the Warden's champion to duel Loghain) 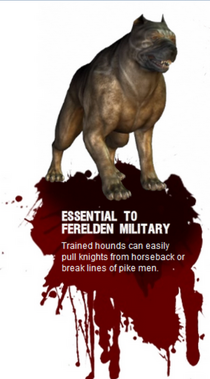 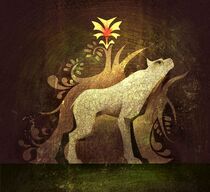 Tier progression of Barkspawn in Heroes of Dragon Age