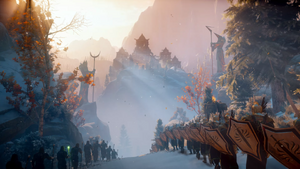 This section contains spoilers for:
Dragon Age: Inquisition.
At some point during the Conclave, procedings were interrupted by the arrival of The Elder One. Several Grey Wardens in attendance took Divine Justinia captive and restrained her; she was used as a sacrifice in a ritual Corypheus conducted with the use of an ancient orb. The ritual was disrupted before it could be finished by the arrival of one who would later be known as the Herald of Andraste. The interruption caused a vast tear in the Veil which destroyed the temple and killed all in attendance, save for the Herald.

Retrieved from "https://dragonage.fandom.com/wiki/Divine_Conclave?oldid=812173"
Community content is available under CC-BY-SA unless otherwise noted.