Devouring Skeleton are skeletons possessed by hunger demons and will attack with a sword and shield. They can employ most of the weapon and shield talents from Dragon Age: Origins.

Demons constantly push against the boundaries of the Fade, and when they finally cross over, they attempt to possess the first living creature they see. They are unable, however, to distinguish that which was once living from that which still is... in fact, a corpse provides an even more tempting target to a weaker demon as it has no will with which to resist the possession. A skeleton is exactly that: a corpse animated by a possessing demon. Upon finding itself trapped within a body that cannot sustain it, the demon is driven insane... it seeks to destroy any life that it encounters, attacking without thought to its own welfare.
—From Codex entry: Skeleton 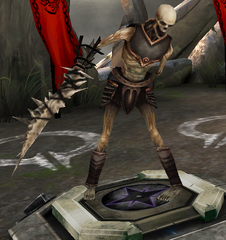 A Devouring Skeleton in Heroes of Dragon Age
Add a photo to this gallery
Retrieved from "https://dragonage.fandom.com/wiki/Devouring_skeleton?oldid=893286"
Community content is available under CC-BY-SA unless otherwise noted.