watch 02:43
The Loop (Games)
Do you like this video?
Destruction
left

Destruction is a DLC multiplayer expansion for the Dragon Age: Inquisition Multiplayer mode available for free on Origin, PlayStation Network and Xbox Live.

Dragon Age: Inquisition - Destruction adds new paths to existing destinations. The conflicts raging throughout the world have upset the balance of nature. Wild creatures now roam the battlefield, introducing chaos as they attack both friend and foe.

Wild creatures have also started roaming the battlefields in search of prey or carrion and can be directed against friend or foe. New enemies appearing in Multiplayer include:

New sets of Multiplayer Armour for all playable Dragon Age: Inquisition Multiplayer characters have been added including: 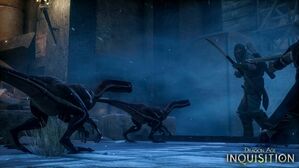 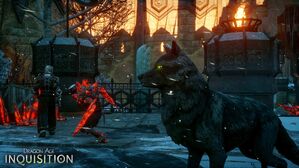 Add a photo to this gallery
Retrieved from "https://dragonage.fandom.com/wiki/Destruction?oldid=808132"
Community content is available under CC-BY-SA unless otherwise noted.