Originally thought to be variants of sloth demons, despair demons have been classified as perverted spirits of hope.

Once upon a time, we classified these as demons of sloth, but we learned that despair demons are something quite different. They are not the antithesis of justice or valor, but rather of hope. They form nightmares tearing away the foundations of self and purpose. When brought into the world, they are most attracted to places the downtrodden populate: alienages, slums, prisons, and the like. The miasma they spread can lead to extreme behavior. We look for a rash of unexplained suicides, men and women so filled with grief they lash out. The most intelligent of these creatures are to be feared, for they not only feed on despair, they understand its causes... and seek to bring it about. From the shadows they ruin lives, drinking the tears of those who have no idea the cause of their misery is not random chance.

—From a lecture by renowned hunter, Ser Hayward of the Templar Order[1]

The despair demon is dressed in tattered black hood and robes. Its skin is grey and very loose, making it appear like a shaved mouse or a rat. To add credence to this, its face has small, mouse-like eyes, a wide mouth, and large rodent-like incisors which are all covered by its hand while not in combat. It also has unusually large feet and hands, which appear deformed in various manners. They are commonly encountered with other demons near Fade rifts.

Treasure, a despair demon, is encountered in the Emerald Graves after solving the treasure hunt walkthrough found in Parson's Battered Notebook.

The Inquisitor and their party rediscover the Lost Temple of Dirthamen after locating Scattered Glyphs found across the Exalted Plains in the Dales. Multiple cursed remains of the High Priest are gather and pieced back together in an ancient ritual chamber resulting in summon the priest back from the dead. Tormented by the horror it had endured, the priest manifests itself as a despair demon and attacks the Inquisitor.

The cursed treasure found in a small cave on Lady's Rest island located on the northern coast of the in the Frostback Basin spawns five elite-ranked level 30 despair demons if any of the treasure is looted. This potentially makes them the highest-ranked enemies encountered simultaneously, they will outrank the Inquisitor's level cap by three, defeating them all can prove challenging.

The Highest One
Treasure

Despair demons prefer to attack from a distance with an ice spike that can be annoying to debilitating in a battle already going poorly if you are attempting to disrupt the rift. They will also frequently dash away when engaged by melee attackers which can prove quite annoying. Their levels range from 12 to 30. 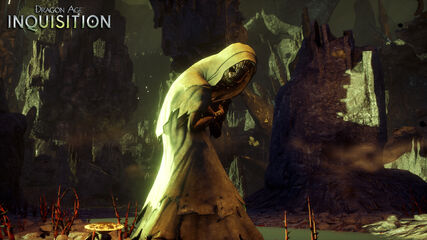 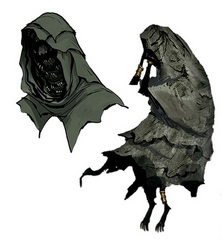 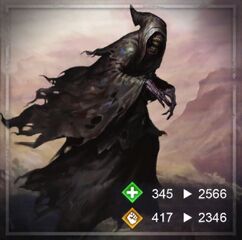 Artwork of a Despair Demon in Heroes of Dragon Age 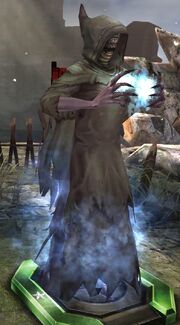 A Despair Demon in Heroes of Dragon Age (Tier IV) 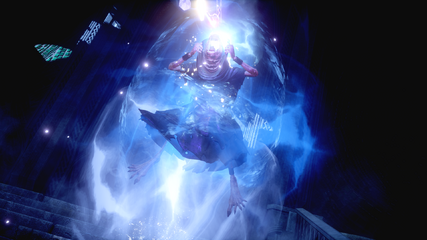 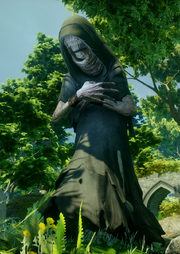