Dragon Age Wiki
Register
Don't have an account?
Sign In
Advertisement
in: Creatures, Dragon Age: The Calling creatures, A Tale of Orzammar creatures,
and 13 more

Edit
watch 02:05
Wiki Targeted (Games)
Do you like this video?
Play Sound
“A fool trusts his eyes. A wise man fears every rock is a deepstalker.”―Dwarven saying[1]

Deepstalkers, called tezpadam by the dwarves, are small lizardlike creatures found throughout the Deep Roads and underground caverns. They are vicious predators of the dark that carve small tunnels through the stone in search of prey, usually nugs.[1][3][4]

Deepstalker are one of the few natural, non-darkspawn creatures to live deep underground. They generally burrow beneath the ground and then strike when their prey is within their midst. Stalkers have round mouths full of serrated teeth and come in several types. Spitters have venom glands and can spit secretions that slow or injure their prey. Jumpers hurl themselves at their targets, knocking them down and making the kill easier. The most common variety scares its prey, leaving the unfortunate victim helpless against the rest of the pack. Although a single deepstalker poses little threat to any experienced explorer, packs can be quite lethal.

—From Tales from Beneath the Earth by Brother Genitivi[5][6]

Scaled like a lizard but with the head and frightful maw of a worm, the deepstalker is able to curl up into a ball that will be indistinguishable from the stone around it.[4]

Deepstalkers hunt in packs, generally by burrowing underground and then striking when their prey is in their midst.[1] Another common way is to camouflage themselves and when the bait is close to launch a surprise attack.[7][8] They run and jump at their victims, attacking with razor claws and lamprey-like mouths full of serrated teeth. If they encounter a group, deepstalkers do not attack unless they have a major numerical advantage, but instead they wait until someone from the group is separated.[8] Although a single deepstalker poses little threat to any experienced explorer, packs can be quite lethal.[3]

The deepstalker walks and leaps on two powerful hind legs and uses the extended tail to stay balanced. Some of them are capable of spitting either acid or paralytic poison from venom glands.[10]

Many dwarven tales for children involve deepstalkers. They are intended to instruct the young dwarves or simply make them laugh.

How the Deepstalker Came to Be[]

In a time only the Stone remembers, a warrior named Gason won honor and glory for his house. He won a dozen Provings and defended his thaig against a legion of darkspawn. But though he was bold, Gason was also selfish and unkind, with a temper like spitting magma. He would rant and rage, mock and malign, until eventually Gason's friends turned their backs on him, his house crumbled, and he was cast into the Deep Roads.

There in the great darkness, Gason's anger roared up so bright it blinded him. He snatched up his sword and began to attack the carvings honoring noble Paragons that lined the walls. One! Two! With each blow of his sword, he cursed the Paragons and the Stone Herself in a voice that echoed from one end of the Deep Roads to the other.

But the Stone always hears the voices of Her children, for good or for ill. As the carvings fell in ruins at Gason's feet, each chunk of rock uncoiled, becoming a horrid creature with a maw full of teeth. One! Two! Hundreds rose and surrounded Gason in a pack, devouring him bite by bite before scattering into the dark.

The creatures, which we call tezpadam, stalk the Deep Roads to this day. They can curl up like tiny stones, waiting to pounce upon trespassers as they pounced upon Gason so long ago. And that's why you're not to play noisy games near the entrance to the Deep Roads. They just might gobble you up too.

Mindless he wanders, all unwary,
Where small dwarven should not tarry.
Veata tezpadam!
Your eyes are shining, bright and merry.

The quarters' light distant and dim,
Here in the cave he's wandered in.
Veata tezpadam!
How quick you are on silent limb.

Small hands collide with cavern wall.
Upon the ground, a missing ball.
Veata tezpadam!
Your brothers hear the high-pitched call.

He turns to see they've circled round,
All grinning at his winning sound.
Veata tezpadam!
What becomes of who you found?

Within the quarter, heard no more
Are songs behind the nursery door.
Veata tezpadam!
Asleep upon the cavern floor.

—A dwarven nursery rhyme, this poem is performed in singsong style for dwarven toddlers[12]

Stalkers come in several types. Spitters have venom glands and can spit secretions that slow or injure their prey. Jumpers hurl themselves at their targets, knocking them down and making the kill easier. The most common variety scares and distracts its prey, allowing the rest of the pack to close in.[1][4]

The Art of the Winter Palace (Deepstalker) 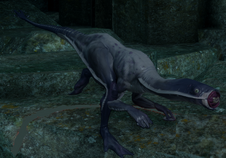 A deepstalker in Dragon Age: Inquisition