This particular section connects to a former lyrium mining site of unknown origin, which contains several depictions and statues of deities of the Elven pantheon. Furthermore, unlike dwarven constructions, this location lacks the usual lightning and heating produced by lava with Varric Tethras remarking that it is unusually dark. Finally, there is no trace of darkspawn activity, a frequent sight in the Deep Roads.

According to ancient depictions, Mythal struck down the titans, ancient elves claimed their demesne and mined their bodies for lyrium. An aeon later, the elves abandoned the mines in terror and sealed them with stone and magic, for what the Evanuris could unleash in their greed would destroy all in its anger.[1]

The Inquisitor goes through an eluvian and finds themselves in underground ruins adorned with statues of Mythal and the Dread Wolf. Lyrium veins grow here and there. The Qunari seem to have a huge operation in the caverns that are unstable and prone to cave-ins. The Inquisitor has to fight them and some deepstalkers with eerie blue eyes as they move forward.

In the Hideout, the Inquisitor encounters Jerran, a former templar from Kirkwall and now a Qunari convert. He explains that the Qunari led by Viddasala are mining and processing lyrium in this section of the Deep Roads and giving it to their Saarebas. This is a part of their plan called "Dragon's Breath", an invasion that would "save the South". He adds that the place resembles a lyrium spring: the more they mine, the more there seems to be. The Qunari use their explosive powder, gaatlock to get lyrium without touching it and have no sources of the precious mineral but the site. Jerran suggests obtaining primers from Central Supply and blowing up the mine. The Inquisitor can either kill Jerran or let him go.

The Inquisitor fights their way to the Cenral Supply and gets the primers. Behind a balustrade and below, they see a huge hall with high ceiling filled with stone coffers containing lyrium.[2] Two winged statues of Mythal flank a lyrium "well" in its center. The Inquisitor then heads back to the Mining and Processing facilities. Despite heavy Qunari resistance, they manage to blow up four facilities: three cranes and a mine. With each explosion, more water starts to pour from the cracks, rapidly flooding the cavern until the Inquisitor has to run for their life back to the eluvian. If they spared Jerran, they find Qunari orders to capture him followed by his body laying in a pool of blood.

If the Inquisitor subsequently visits the location, they discover that most of it is now submerged. After they get the Anchor Blast upgrade for the Anchor Discharge in the Shattered Library, they can use the ability at the Grand Stairway, near a collapsed entrance surrounded by casks with gaatlok to clear the way. The eluvian behind the rubble leads to an Unknown Ruin with an elven fresco depicting the death of a titan and a puzzle required for the "Lateral Thinker" achievement.

Sigil of the Highland Ravager

Communique in the Deep Roads 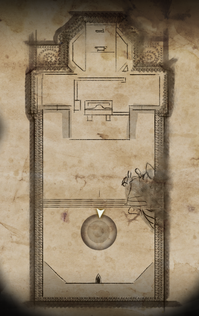 Map of the hidden ruin

Lyrium "well" behind the Central Supply

View from the Grand Stairway

Bridge of the Stone
Add a photo to this gallery

Retrieved from "https://dragonage.fandom.com/wiki/Deep_Roads_(Trespasser)?oldid=870948"
Community content is available under CC-BY-SA unless otherwise noted.