watch 03:03
The Loop (Games)
Do you like this video?
“Ah my little Fenris, predictable as always.”

Danarius is one of the powerful magisters of the Tevinter Imperium, with interests in experimentation with magic and lyrium. He treats his slaves brutally and resents any of his possessions which elude his grasp. Castellum Tenebris, which is deemed impenetrable, is the seat of House Danarius.

Danarius experimented with magic and lyrium and constantly pushed the boundaries of what lyrium could do. In his research, he stumbled upon an ancient treatise that described a process of embedding lyrium beneath the skin. The treatise's instructions were vague however, and Danarius spent years refining the technique. Once it was close to perfect, he started looking for a living subject among his slaves by offering a position as his personal bodyguard and offering a boon. Many slaves, elven and human, jumped at the chance, but the slave named Leto was eventually chosen, as Danarius was impressed with his iron resolve.[1]

During Bait and Switch, Hawke and Fenris can assault Danarius' Kirkwall estate in Hightown. The mansion is heavily guarded by demons, though it transpires that the magister has fled to Tevinter.

In 9:34 Dragon, Danarius dispatches Hadriana, his apprentice, to Kirkwall with a contingent of slavers to try and recapture Fenris. Hadriana and those sent with her however are slain in Hawke and Fenris' attack on the Holding Caves. However Hadriana reveals to Fenris' the identity of his sister, Varania before she is killed.

Finally in 9:37 Dragon, Aveline will inform Fenris that his sister has been spotted in Kirkwall. Fenris has Hawke accompany him to the Hanged Man, where Varania is staying. However, it emerges that Varania is a mage, and has been accepted as Danarius' apprentice in exchange for helping re-capture her brother. Hawke can either surrender Fenris to Danarius, or aid their companion in killing the magister. In the latter option Fenris grabs the exhausted Danarius by the throat after a fierce battle, and uses his lyrium-power to kill him remarking to Danarius "You are no longer my master!".

If Hawke allows Fenris to be taken, they will receive a letter from Danarius, which includes payment, an account of Fenris's status, and an offer to tour the Arcanist Hall in Minrathous, should Hawke ever find themselves in the city as well as Danarius' thanks.

The plot follows BioWare's own canon, meaning it may not follow some of the player's choices in the games.
This section contains spoilers for:
Dragon Age: Knight Errant.
A weapon imbued with red lyrium was stolen from Kirkwall and sold to House Danarius for information by Gaius, an agent of Fen'Harel. 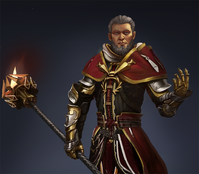 Promotional image of Danarius in Heroes of Dragon Age

Retrieved from "https://dragonage.fandom.com/wiki/Danarius?oldid=874268"
Community content is available under CC-BY-SA unless otherwise noted.