“You were born amidst the Dalish elves: noble wanderers who refuse to join the society of humans that subjugated their homeland so long ago. The Dalish travel the land in tightly knit clans, struggling to maintain their half-forgotten lore in a human world that fears and despises them. You spend your time hunting with your clan-mate Tamlen in the forests, and as is sometimes the case, your quarry is not always the local wildlife…”

New campaign with a Dalish Elf character (Warrior or Rogue)

Elves with the Dalish Elf Origin roam free in the forest, seeking to recover the lost lore of ancient Elvhenan. Many of them look down on the "flat-ears", the City Elves who live trapped in poverty and high walled Alienages amongst the shemlen—the humans or "quick children".

“'We are the Dalish: keepers of the lost lore, walkers of the lonely path.
We are the last of the Elvhenan, and never again shall we submit.'

This is the oath the Dalish elves hold close to their hearts. In ancient times, the elves ruled over Thedas alone, ageless and beautiful, until the humans came. Enslaved for a thousand years, the elves lost not only their immortality but their very identity. The Dalish are those elves who refuse to live in human cities, proudly wandering the most remote corners of the wild lands in small clans that rarely meet. Their wagons are welcome nowhere, and more than one tale is told of the Dalish clashing with remote villagers who attempt to drive them away by force.

Much has been lost, but the Dalish will find what has been lost and keep it safe. They will relearn the elven tongue, rediscover the ancient crafts and practice the old magics. They will spurn the human god and instead cleave to the ancient pantheon of the elves, praying that one day their own gods will return and lead their people to a new homeland. There, the Dalish will await the return of those elves who have forgotten what they were, and they will teach them to remember.

Until that day comes, they will stand fast. As long as the landships are seen on the horizon there will be hope, hope that what was long ago shattered by the touch of mortal man may one day yet be restored.”[1]

Main article: The Lost Mysteries of the Ancients

Whilst hunting in the woods of the Brecilian Forest with Tamlen, a friend since childhood, the Dalish Elf comes across three humans who claim to have discovered ancient ruins in a nearby cave. Exploring these ruins, Tamlen touches a strange mirror which unleashes some sort of magic that knocks the Dalish Elf unconscious. The Dalish Elf is rescued by Duncan, a Grey Warden, and awakens two days later in their clan's camp, barely recovered from a peculiar fever. Sent back to the cave to search for Tamlen, they meet Duncan again. He explains that the mirror is somehow transmitting the darkspawn taint and that the only way you can survive is to join the Grey Wardens, who gain immunity to the taint.

Dalish elves receive Codex entry: The Dalish Elves at the beginning of the origin story. See the main article for a detailed walkthrough.

Note: There are no differences in this origin story based on gender or class, except that a female Dalish Elf can trip a romance flag with Tamlen by speaking to him while in the ruins before finding the mirror and selecting the 'I enjoy spending time with you' response.

The Lost Mysteries of the Ancients

In addition to those selected by the player at character creation, a Dalish Elf Warden automatically begins with the following:

Travel with Duncan to Ostagar, where King Cailan Theirin is mustering an army against the darkspawn. After being greeted by Cailan on arrival, the next quest will be Joining the Grey Wardens. If it has not previously been earned, the Corrupted Achievement will be unlocked. 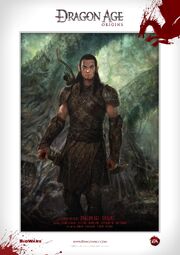 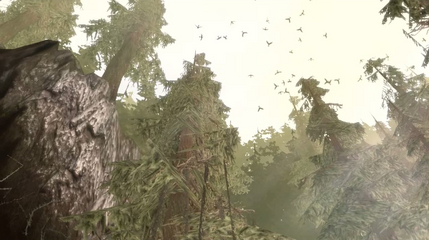 The Brecilian Forest, where the Warden's clan wanders and hunts 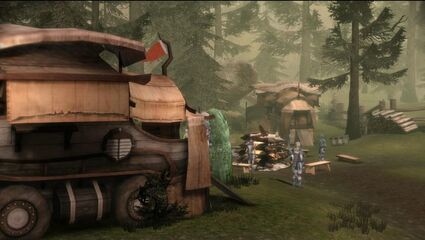 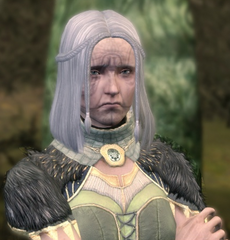 Marethari, Keeper of the Warden's clan