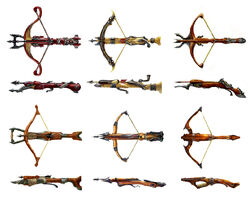 Crossbows are ranged weapons that use bolts for ammunition. Crossbows have the greatest range and intrinsic damage, particularly against armored enemies, but take significant time to reload. Crossbows can be loaded with special bolts which deal additional effects like elemental damage or knocking back the opponent. Furthermore, their requirement is strength-based, not dexterity-based like bows. Due to the physical design of a crossbow, their damage is not affected by any stat (just as higher strength would not make a bullet fire harder). This gives them a disadvantage to high level archers, but makes them well-suited for low-level archers, or as alternate weapons for warriors.

Damage can be increased in a few different ways when it comes to crossbows.