Crestwood is a grasslands region located north of Lake Calenhad in Ferelden.

Crestwood's namesake, taken from Ser Venar Crestwood, was awarded to the region by King Brandel after Ser Venar, the first captain of Caer Bronach, guarded the keep against Orlesian forces during the Second Orlesian Invasion of Ferelden in 8:26 Blessed.[1]

Three Trout Pond hides a sinkhole hundreds of yards deep. Darkspawn emerged from this and other caves to attack Crestwood during the Blight. The flood that wiped out Old Crestwood drowned the blighted ones, and the excess water created the pond we see today.[2]

The village was hit hard by the darkspawn during the Fifth Blight. Many refugees tried to find shelter in Crestwood, however some of them were carrying the blight disease and were infecting others. The diseased were moved to the caves beneath the town. On the 8th of Bloomingtide 9:30 the invading darkspawn finally arrived and surrounded most of the valley the village is in. Mayor Gregory Dedrick decided to open the dam and flood the village, killing the darkspawn, and any remaining villagers inside, to save the lives of everyone else.

Following their exodus from Haven, the Inquisition receives reports of the appearance of a Fade rift beneath Crestwood's lake. As a result, demons and the undead plague the area. The region is also troubled by a dragon that is ravaging its livestock and a group of highwaymen that have taken over Caer Bronach and prowl the surrounding roads. Crestwood is also the site at which Hawke's Grey Warden informant has taken refuge. The Inquisitor can gain access to Crestwood by completing the Find the Warden war table scouting operation in Skyhold.

Note: The 19 regions below make up the Regions in Regions in Crestwood collection. Discovering all of them grants 200 Influence.

Rift near the North Gate

Escape Routes for Agents in Crestwood

To Serve Any Master

Antivan Sip-Sip - in a cave northeast of the Three Trout Farm Inquisition Camp, at Glenmorgan Mine, search near the Guide of Falon'Din landmark.

Hirol's Lava Burst - in Old Crestwood, head west by northwest from the astrarium, search inside the house with a closed door.

Vintage: Warden Gibbins - in Old Crestwood, search the damaged house on the lakeshore.

Freed Are Slaves (piece #1) - found in the Flooded Caves, in an adjacent chamber to the rift (bash the destructible head down the ladder).

Freed Are Slaves (piece #2) - found in the Flooded Caves, on a stone table next to the dwarven statue located in the chamber across from the rift.

Freed Are Slaves (piece #3) - found in the Flooded Caves, on a wooden table situated near the cave's exit leading back to East Side Hills region of Crestwood.

Freed Are Slaves (piece #4) - found in Caer Bronach, head through the door to the right of the requisition table (the room can only be accessed after the keep has been captured).

Freed Are Slaves (piece #5) - found in the Hidden Cave off of Old Market Road located just south of the Village of Crestwood.

Ferelden Banner Crown - inside the Fisherman's Hut located due south of the astrarium found in the East Side Hills / The Flats region.

Paragon's Luster (only found in the Flooded Caves)

Stormheart (only found in the Flooded Caves)

Lightning Rune Schematic - in the southernmost cave located in the Black Fens region (southeast of the Northern Hunter's ruins).

Fade-Knocker - looted from the large wyvern in Glenmorgan Mine; see side quest Wyrm Hole.

In Death, Sacrifice - looted from the Northern Hunter high dragon.

Silkdart - available for purchase from the Caer Bronach Merchant for 472

Thunderstrike - randomly available at the Caer Bronach Merchant for 8572

Wedge of Destiny - on a table atop a hill just west of the Three Trout Farm Inquisition Camp.

Codex entry: Regarding the Calling

Banner of the Blind Men

A Crumpled Note (the monster)

A Soggy Note Pinned to the Dock

The rift beneath the lake 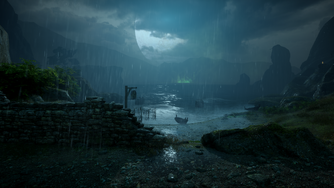 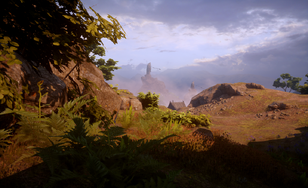 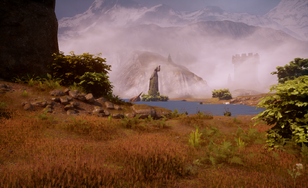