“Least a bastard knows who his mother was. Puts him one up on you Qunari, right?”

Cremisius Aclassi, also known as Krem, is a member of the Bull's Chargers mercenary company. He serves as the Iron Bull's second-in-command.

Krem was born to a Tevinter tailor. Although raised as a typical girl, Krem realized he was different from the girls that he knew, and would often pretend to shave with his father. After reaching adulthood, Krem's mother began to pressure him to marry the son of a wealthy merchant to save the family from slavery. Krem refused, and his relationship with his mother was destroyed.

Some time later, a Tevinter magister, in an attempt to save the poor from the cold, had his slaves make clothes and sell them for almost nothing. Unable to compete with slave labor, Krem's father was put out of business and forced to sell himself into slavery to save his family. He became one of the servus publicus.

After his father's sacrifice, Krem joined the army, but since women's roles in the Tevinter military are heavily restricted, Krem concealed his gender status by bribing the healer who performed military physicals. His charade went on for several years, but when the healer was called away on duty, the new healer discovered Krem's secret and reported him to the authorities. Faced with the threat of slavery or execution for falsifying military documents, Krem ran, but was caught in a border town's tavern by a Tevinter tribune and his men. As the tribune and his men attacked Krem for deserting (to "make an example" out of him), the Iron Bull came to Krem's defense, losing his eye when he came in between Krem and a Tevinter's flail.

After the Herald confers with their advisors regarding their encounter with Revered Mother Hevara, Lord Seeker Lucius, and Grand Enchanter Fiona in Val Royeaux, Krem appears outside the Haven Chantry, suggesting that the Herald appraise the Bull's Chargers on the Storm Coast. Should the Herald recruit Iron Bull and the Chargers, Krem can be found near Bull outside the village gates.

When the Inquisition moves to Skyhold, Krem takes up residence in the Herald's Rest tavern. Speaking to Krem (at either location) and asking what the Chargers can be used for will unlock quests and war table operations throughout the game.

Krem's gender comes up when the Inquisitor shares drinks with the Chargers; afterwards, Krem feels comfortable enough with the Inquisitor to answer questions about his past.

Krem is later dispatched by Bull to lead the Chargers on an operation to the Hissing Wastes with Dorian and the mage assassin Marius.

Krem enlists the Inquisitor's help in organizing a surprise for Iron Bull's birthday.

He tells the Inquisitor that the Chargers have considered disbanding to join the Inquisition outright, but that they've refrained from doing so because Bull gets upset at the idea.

Krem is alive and Cole has been made more Spirit:
Cole plays matchmaker between Krem and Maryden Halewell. Krem tells her that he really loves her songs, and that he would sometimes stand up on his chair at the Herald's Rest to get a better look.

If Iron Bull is Tal-Vashoth:
After the Exalted Council, Krem and the Chargers return to taking jobs throughout Orlais and Ferelden, fighting demons and clearing out remaining Venatori. 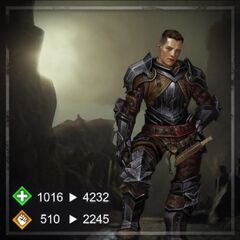 Artwork of Cremisius in Heroes of Dragon Age