The Corrupted spider is a variation of the Giant spider which has been corrupted in subterranean locations by the ever-present darkspawn taint.

Corrupted spiders are giant arachnids that originally grew in the depths of the Deep Roads, feeding on numerous species of large bats. When the Deep Roads were lost to the darkspawn, they began to feed on the numerous genlocks and their numbers grew exponentially... as did their size. The darkspawn taint has become a permanent part of their system, passed on to their progeny. This has had the effect of increasing their size abnormally, as well as their aggressiveness. Some corrupted spiders have made their lairs in surface forests, but most remain underground, close to their Blight-tainted meals. 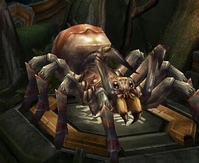 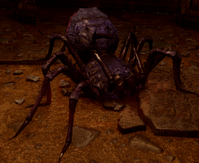 Corrupted spider in Dragon Age: Inquisition
Add a photo to this gallery
Retrieved from "https://dragonage.fandom.com/wiki/Corrupted_spider?oldid=807881"
Community content is available under CC-BY-SA unless otherwise noted.