watch 03:03
The Loop (Games)
Do you like this video?
“It doesn't matter that they won't remember me. What matters is I helped.”

The Forgotten Boy
Subjected to His Will

Cole appears to be a human male Hedge mage who lives in the White Spire Circle of Magi at Val Royeaux in Orlais. He is also a potential companion in Dragon Age: Inquisition.

“He is a ghost in the shadows, walking unnoticed through crowds. He can slit an enemy's throat before they even realize he's there, and slip away, never to be seen again. Those few who do notice him soon forget he ever existed… and Cole isn't certain that he does exist.”[5]
This section contains spoilers for:
Dragon Age: Asunder.

Cole is a unique entity, described as being caught somewhere between the realm of the Fade and the real world. He is a spirit, though there are some who believe that he may be some sort of demon pretending to be human. Cole himself is unsure of what exactly he is, and his unique set of abilities are unprecedented. Cole also has the uncanny ability to sense people who are in pain. He uses this ability to find people in the most painful moment of their lives and offers them comfort without hesitation, judgement, or expectation of thanks.[1] He is searching for his place in the world; an ally to those who wish to help others.

Cole was first encountered as the Ghost of the Spire. In actuality though, no one can see or remember him - none save Rhys, who goes on to form a friendship with the young man over the course of a year. Cole is also the murderer who has been stalking the corridors of the Spire, granting apprentices and newly-arrived mages a swift end rather than the eventual prospect of Tranquility or execution by the Templars. He does these so-called mercy killings because those who wish for death or are about to die are the only ones who can see and "remember" him.

Before Rhys, Wynne, Evangeline and Adrian leave for the Adamant Fortress, Cole overhears Evangeline's conversation with Lord Seeker Lambert who orders her to kill the mages should they discover that the Rite of Tranquility can be reversed. Worried, Cole follows the group in an attempt to warn Rhys and to keep him safe. While in Adamant, the group, including Cole, are drawn into the Fade and they face various nightmares - one of which is Cole's. His fade nightmare reveals Cole came from a very poor family with an abusive and violent father who thought his children cursed for having magic. It is further revealed that Cole and his sister (who died hiding) lived in terror until finally one day, Cole used his mother's dagger and killed his father. Some time after this, the Templars found him and brought him to the Spire.

After Rhys is imprisoned for the apparent murder of Pharamond, everyone suspects Cole to be the culprit. However, when confronted by Wynne and Evangeline, Cole confessed that Pharamond begged him for death but he refused. Cole then joins Leliana in storming the Spire's cells and freeing the imprisoned mages. Cole goes to locate Rhys and frees him. They attempt to escape the Spire through the sewers, but are discovered by Lambert. Lambert reveals he used Rhys' phylactery, which he had kept on his person to prevent it from being destroyed. Cole tries to murder Lambert, but the Lord Seeker is able to disrupt Cole's invisibility using the Litany of Adralla, revealing that Cole is in fact a spirit or demon with the ability to keep people from remembering him, or even noticing him at all. The Lord Seeker relentlessly assaults Cole, accusing him of using Rhys to commit murder. Cole slowly realizes that Lambert is correct about what he is, and with that knowledge, fades away.

After Lambert has dictated a letter, declaring the independence of the Templars and Seekers from Chantry oversight, he retires to his quarters for the evening but finds himself confronted by Cole with a dagger to his throat. The Lord Seeker is surprised, but Cole explains that there was in fact a human mage named Cole who had been brought to the dungeons of the Spire and was subsequently forgotten and left to starve by the Templars. His cries had attracted the spirit who now poses as Cole, who had stayed with him to console him until the very end. Knight-Commander Laroche, believing the templar responsible sufficiently racked with guilt, later erased all evidence of his existence to hide their shame over their negligence. Lambert demands to know what Cole wants, to which Cole replies to Lord Seeker Lambert that he wants him to "look into [his] eyes", the same thing he told all his victims before killing them.

In attempting to find his place in the world, Cole joins the Inquisition. Depending on whether the Inqusitor chose to support the mages or templars, Cole is introduced to the Inquisition in a different manner.

If the templars were supported, Cole first appears at Therinfal Redoubt to help the Inquisitor escape a demon of Envy.[5] It is here that he helps the Inquisitor fight against the Envy demon, both out of the nightmare the demon has placed them in, and upon returning to the real world.

Upon the Inquisition returning back to Haven, Cole will suddenly appear on the table in the War Room, stating that he followed the Inquisitor back, and that he wants to help the Inquisition. You can choose to either recruit him here or permanently throw him out of the party .

Alternatively, if the Inquisitor chose to recruit the mages to seal the Breach, Cole turns up at Haven to warn the Inquisition about the attack of the Red Templars. You will decide whether to recruit him at Skyhold.

In Haven he is located near the merchant near the main gate into Haven. When you first get to Skyhold he will be down in the bottom courtyard. It is also here where a small cut scene will take place, where Cole is sensing the pain of a dying soldier. The Inquisitor has the option to allow Cole to grant the man peace by death, or to tell Cole to let the man try and recover. If mages were recruited, the same cut scene will take place at Skyhold.

At the Inqusition headquarters at Skyhold, Cole moves to the upstairs in the tavern. He begins doing odd things around the stronghold, such as burning turnips or hoarding daggers. However, if the Inquisitor listens to more conversations and does not tell him to stop, it will be revealed that these odd things are his ways of helping people.

After the Inquisition confronts the Grey Wardens at the Adamant Fortress, Cole begs Solas to bind him in order to prevent him from being controlled like the demons. Solas initially refuses and the Inquisitor can go to retrieve an amulet that can prevent spirits from being controlled, even through blood magic. Once the amulet is retrieved, Solas finds that something is blocking its magic from affecting Cole. Cole senses the location of the thing preventing the amulet from working. The Inquisitor, Cole, Solas, and Varric go to the location to find the Templar that left the original "Cole" to die in the cell at the White Spire. Cole goes into a rage and attacks the Templar, chasing him away. Solas suggests Cole embrace his essence as a spirit of compassion and forgive the Templar, while Varric suggests Cole to face his offender head on and come to terms with what happened.

If the Inquisitor chooses to have Cole forgive the Templar, Solas and Cole confront the Templar and Solas advises Cole to feel the Templar's regret for his actions. Cole accepts himself as a spirit of compassion and the amulet works so he can never be bound or controlled by others. He feels everyone's pain but he can approach them unseen and whisper soothing words to them to ease their pain.

If the Inquisitor sides with Varric, Varric and Cole confront the Templar and Varric gives Bianca to Cole for him to kill the Templar with. Cole points the weapon at the Templar but Bianca jams when he pulls the trigger. Learning from Varric that killing the templar won't make his pain go away, Cole tries to make the templar forget, but Varric stops him, telling him both Cole and the templar need to remember what they've done. Solas says the amulet will never work on Cole and Varric insists it is because Cole is now more human and is no longer vulnerable to being controlled because of it. Cole retains his skills and can still feel people's pain- albeit less loudly and more easily drowned out by his own pain- but he could now be seen and remembered by people and begins to feel things he had never felt prior. He is also more aware about the complexity of human nature and is able to remember things he's done in the past. By becoming more human, he lost the ability to make people forget him as well.

Later on, Cole can be found on the Skyhold battlements, pondering on how Corypheus had managed to cheat death. This leads him to question if he could have saved the mortal Cole. If Cole was encouraged to forgive the templar from his personal quest, he will make himself forget about the mortal Cole- thus erasing his Cole persona. Though he will still acknowledge being addressed by the name Cole, he has fully embraced being a spirit and now speaks in a monotone voice.

If Cole was encouraged to work through his feelings with the templar, he will tell the Inquisitor the tale of how he met the mortal Cole and how the forgotten apostate's last words to him as a spirit was "Thank you" for holding his hand in his final moments. Alternatively, if Cole's personal quest has not been completed, Cole will state that the memory of being unable to help the mortal Cole weighs on him and keeps him there. Whether the Inquisitor encourages or discourages Cole to forget the mortal Cole, Cole will be unable to forget him.

This section contains spoilers for:
Trespasser.
If Inquisitor is friends with Cole:


Two years after Corypheus' defeat, the Inquisitor can meet Cole before meeting the Exalted Council after he subtly has an Orlesian noble relinquish his table so that a bird may feast on his left over bread crumbs. He then joins the Inquisitor as a companion as they uncover a Qunari plot in the midst of Exalted Council's negotiations with the Inquisition.

If Cole is more Spirit:


If Cole was made more Spirit, he will subtly play matchmaker between Maryden Halewell and Krem (if the Chargers are alive) or Zither (if the Chargers are dead). In the end, Cole will return to the Fade because he senses that will be where he will be most needed to ease pain as a Spirit of Compassion, but he promises his friends in the Inquisition will not forget him.

If Cole is more Human:
If Cole was made more Human, it is revealed that he and Maryden have become a couple, and in the end, the two will travel together across Thedas, where Cole and Maryden work together to ease the pain of many people.

A few side quests in the Hinterlands and the Exalted Plains where you help people in dire circumstances gains him moderate approval whether he is in the party or not.

Instances that will yield "Greatly Approves" include: 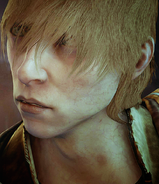 Cole in the "Choice & Consequence" trailer

Cole fighting undead with Blackwall and a female warrior Inquisitor

A close-up of Cole 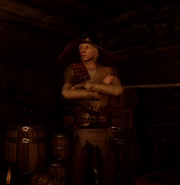 Retrieved from "https://dragonage.fandom.com/wiki/Cole?oldid=813996"
Community content is available under CC-BY-SA unless otherwise noted.