The Seekers of Truth

When I mentioned powers greater than the templars, I didn't mean the Chantry. Sure they command the templars, but that was not always so—the Inquisition once hunted heretics and cultists as well as mages, and their reign of terror ended only with the inception of the Circle of Magi. They became the Templar Order, for good or ill the watchers of the mages and the martial arm of the Chantry.

It was a mutually beneficial arrangement, but few know that the Chantry created yet another order to watch over the templars: the Seekers of Truth. I know little of them myself, but I can say the following things with certainty: they serve the Divine and they are feared. When a Seeker steps from the shadows, templars run for cover—because why would he come unless the templars somehow failed in their duties? Seekers are extremely effective investigating abuses within the Circle and hunting particularly evasive apostates. It's said they are immune to a blood mage's mind control and possess the ability to read minds or erase memories, but this is likely exaggeration.

So we return to my original dilemma. Who watches powers greater than that of the templars? One assumes it's the Divine, but how much could She know about their activities when their very existence is a mystery to most?

—A letter from an unknown priest, found in the Grand Cathedral archives, 8:80 Blessed 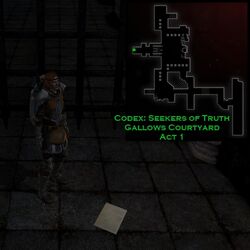 Retrieved from "https://dragonage.fandom.com/wiki/Codex_entry:_The_Seekers_of_Truth?oldid=576867"
Community content is available under CC-BY-SA unless otherwise noted.