Ghilan'nain: Mother of the Halla

• Other Origins: Obtained in the Brecilian Outskirts

Found on the Exalted Plains, on the left halla statue prior to entering the Crow Fens; see gellery

They say Ghilan'nain was one of the People, in the days before Arlathan, and the chosen of Andruil the Huntress. She was very beautiful—with hair of snowy white—and as graceful as a gazelle. She kept always to Andruil's Ways, and Andruil favored her above all others.

One day, while hunting in the forest, Ghilan'nain came across a hunter she did not know. At his feet lay a hawk, shot through the heart by an arrow. Ghilan'nain was filled with rage, for the hawk—along with the hare—is an animal much beloved of Andruil. Ghilan'nain demanded that the hunter make an offering to Andruil, in exchange for taking the life of one of her creatures. The hunter refused, and Ghilan'nain called upon the goddess to curse him, so that he could never again hunt and kill a living creature.

Ghilan'nain's curse took hold, and the hunter found that he was unable to hunt. His prey would dart out of sight and his arrows would fly astray. His friends and family began to mock him for his impotence, for what use is a hunter who cannot hunt? Ashamed, the hunter swore he would find Ghilan'nain and repay her for what she had done to him.

He found Ghilan'nain while she was out on a hunt with her sisters, and lured her away from them with lies and false words. He told Ghilan'nain that he had learned his lesson and begged her to come with him, so she could teach him to make a proper offering to Andruil. Moved by his plea, Ghilan'nain followed the hunter, and when they were away from all of her sisters, the hunter turned on Ghilan'nain. He blinded her first, and then bound her as one would bind a kill fresh from the hunt. But because he was cursed, the hunter could not kill her. Instead he left her for dead in the forest.

And Ghilan'nain prayed to the gods for help. She prayed to Elgar'nan for vengeance, to Mother Mythal to protect her, but above all she prayed to Andruil. Andruil sent her hares to Ghilan'nain and they chewed through the ropes that bound her, but Ghilan'nain was still wounded and blind, and could not find her way home. So Andruil turned her into a beautiful white deer—the first halla. And Ghilan'nain found her way back to her sisters, and led them to the hunter, who was brought to justice.

And since that day, the halla have guided the People, and have never led us astray, for they listen to the voice of Ghilan'nain. 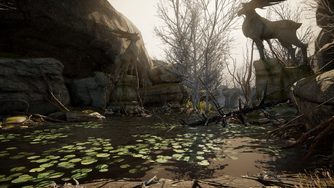