watch 02:48
Wiki Targeted (Games)
Do you like this video?
Play Sound

Cleaning House is a side quest in Dragon Age: Inquisition.

Inquisition soldiers were dispatched to meet with a group of bandits operating on the Storm Coast. The Inquisition lost contact with its soldiers before their planned rendezvous with the bandits.

Upon your first time visiting the Storm Coast, scout Harding will brief the Inquisitor on the disappearance of her scouts that were sent to negotiate with a bandit group called Blades of Hessarian. She asks the Inquisitor if they could look into it.

Head south from the camp and follow the path up through the hills. Eventually you will come across Hessarian enemies. Aside from the name they are the standard human-type enemies and should fall with the same strategy. In a run-down shack at the top of the hill you will find the bodies of the missing Inquisition scouts, as well as a bandit's notes about the Mercy's Crest, an amulet that can be crafted via a Requisition table.

Note: The recipe grants 150 XP when you pick it up.

At this point, you must go to the main camp to the south (indicated on a nearby map) and confront the bandits' leader for his actions. You can either assault him directly, or take time to craft the amulet (requires 1 Deepstalker Hide and 2 Serpentstone, all of which can be obtained on the Storm Coast) and equip it on the Herald prior to approaching the camp. This will allow you to enter the area without any trouble and allow the Inquisitor to challenge the chief directly.

The Hessarian Leader will fight you regardless of how you approach him or answer him. He fights with a hatchet and no shield, but is elite-ranked and has two elite-ranked Hessarian Hounds join him, which are essentially Mabari dressed for this faction, so use companions and tactics that will keep his dogs in check. They are vulnerable to fire, resistant to cold, and have high armor rating. Crowd control and use of guard can manage the mabari hounds until they succumb to the damage. If you pull the party back when challenging the Hessarian Leader, he will not pursue, leaving that to his hounds. This will allow ranged characters to damage and kill him with relative ease, even on Nightmare, while warriors tank the Hounds. Block and Slash is very useful here, as quarters are tight and all enemies use melee attacks.

If you elected to simply assault the camp without the amulet, you will have to face the two guards at the gate, and then three normal-ranked Hessarian archers (one of whom actually fights with a large shield and hatchet) alongside the Hessarian Leader and his mabari.

After the Hessarian chief is slain, the quest is completed. If you were wearing the Mercy's Crest, the screen fades briefly as the camp refills with Hessarians, who automatically join the Inquisition. You can talk to one of its members to gain further information.

Note: If you challenged the leader, two additional notes and a codex will appear around the camp that grant further XP.

Completing the quest either way yields:

If the Hessarians are attacked:

If the Hessarian Leader is challenged: 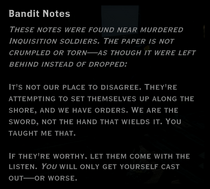 This note is found with the Mercy's Crest recipe 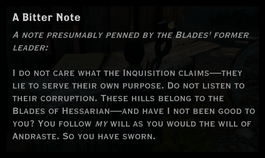 Found in the Hessarian camp (only if you challenge the leader) 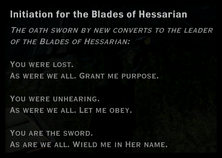 Retrieved from "https://dragonage.fandom.com/wiki/Cleaning_House?oldid=883435"
Community content is available under CC-BY-SA unless otherwise noted.