Edit
watch 02:05
Wiki Targeted (Games)
Do you like this video?
Play Sound
“These men and women are giving their lives, magister. That might mean little in Tevinter, but for the Wardens, it is a sacred duty.”

While many other Grey Warden mages join the Order right after their Harrowings, Clarel was already an Enchanter before joining the Wardens.[1] She was the Warden who conscripted Ser Jean-Marc Stroud into the Grey Wardens.[2]

Clarel was promoted to Commander of the Grey of Orlais in 9:36 Dragon, when the former Warden-Commander, Alisse Fontaine, undertook her Calling.[4]

After her promotion, she was eager to help the Fereldan Grey Wardens to rebuild, and tried to negotiate with Arl Teagan of Redcliffe on many occasions, but due to Fereldan mistrust of the Orlesians, and the incident with Warden-Commander Sophia Dryden during the Storm Age, she was again unable to help.[5]

Lord Livius Erimond, a Tevinter magister and Venatori agent, convinced Clarel to use blood magic to raise a demon army, invade the Deep Roads and kill the Old Gods before they wake. Though Clarel reluctantly consented to the human sacrifice necessary for the binding rituals Erimond taught the Grey Wardens, she was unaware that the rituals also enslaved the Wardens to Corypheus. The temptation of ending the Blights proved too great for Clarel, and opposition to her alliance with Erimond was crushed swiftly, sending veteran Wardens into exile for their insubordination.

Learning of Clarel's plans, the reformed Inquisition lay siege to Adamant Fortress just as Clarel begins to summon her demon army. Following a bloody battle, the Inquisitor breaks Erimond's hold over Clarel, who attacks the magister. After this, she commands her wardens to either help or kill the Inquisitor.

A Letter Found on a Grey Warden Mage 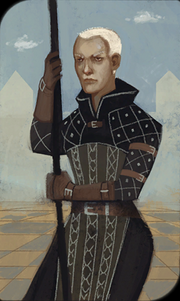 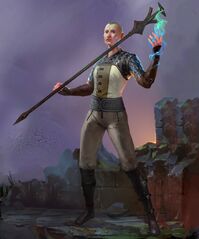 Promotional image of Clarel in Heroes of Dragon Age